Party stuck in 'time warp' in giving him power for full overhaul: Critic

Opposition Congress party president Rahul Gandhi yesterday offered to resign from his post, taking responsibility for the humiliating defeat in the general election in which Prime Minister Narendra Modi led his Bharatiya Janata Party (BJP) to power in a landslide for the second straight victory.

But the Congress Working Committee (CWC), the highest decision-making body of the party consisting of 25 leaders, including former PM Manmohan Singh, predictably rejected Mr Gandhi's resignation in a sign of the continued hold of the Nehru-Gandhi family on the party.

The family has dominated the Congress party since independence. Mr Gandhi's great-grandfather Jawaharlal Nehru was India's first PM, his grandmother Indira Gandhi was its first woman PM and his father Rajiv Gandhi was its youngest PM.

It was unclear whether the Congress leader, who lost his seat in the family bastion of Amethi in Uttar Pradesh but won in his second choice constituency of Wayanad, would accept the CWC decision. At the meeting, he also asked Congress leaders to think of others who could lead the party.

"Rahul Gandhi offered his resignation but it was rejected by the members of the CWC unanimously," said Congress spokesman Randeep Singh Surjewala at a press briefing.

A resolution passed by the CWC said it "requested the Congress president for his leadership and guidance in these challenging times" and authorised him to do a "complete overhaul and a detailed restructuring at every level of the party".

The Congress won just 52 out of 542 seats in the Lok Sabha or lower house of Parliament - a near repeat of its performance in the 2014 election - initiating a debate over whether political dynasties resonated with voters in an aspirational India trying to rise above class and caste. 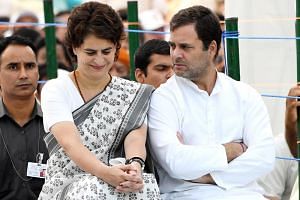 The party won 44 seats in 2014 and has since struggled to stay relevant in Indian politics.

The Congress went into the latest election buoyed by wins earlier in separate polls in the states of Rajasthan, Madhya Pradesh and Chattisgarh, which were considered strongholds of the BJP.

But a weak campaign, lack of public faith in the Congress leadership and a weak organisational structure, coupled with Mr Modi's popularity and an aggressive BJP campaign, are seen to have contributed to the decimation of the Congress.

At least one television channel accused the Congress of being stuck in a "time warp" following the CWC meeting.

"They (Congress and Mr Gandhi) are hopelessly dependent on one another. But this is not leading the party anywhere," said Mr Rasheed Kidwai, a journalist and author of a book on the Congress party.

"The Rahul Gandhi resignation issue is not settled by any means. He may still want to resign and stick to it because of the enormity of the defeat, including in Amethi. He will find it can't be business as usual."

Mr Modi, who was set to stake his claim to forming the government last night after meeting Indian President Ram Nath Kovind, campaigned aggressively against dynastic politics, highlighting how Mr Gandhi had been handed the party leadership due to his lineage.