COLOMBO • The suicide bomber waited patiently in a queue for the Easter Sunday breakfast buffet at Sri Lanka's Cinnamon Grand Hotel before setting off explosives strapped to his back.

Carrying a plate, the man, who had registered at the hotel the night before as Mohamed Azzam Mohamed, was just about to be served when he set off the devastating blast in the packed restaurant, a manager at the hotel said.

"There was utter chaos," said the manager, who spoke to Agence France-Presse (AFP) on condition of anonymity as he was not allowed to speak for the company.

The account is one of many from eyewitnesses to the carnage caused by the apparently highly coordinated attacks on hotels and churches on what initially seemed to be a peaceful Easter Sunday.

The Cinnamon Grand's Taprobane restaurant was having one of its busiest days of the year for the Easter holiday weekend.

"He came up to the top of the queue and set off the blast," he added. "One of our managers who was welcoming guests was among those killed instantly."

The bomber also died. Parts of his body were found intact by police and taken away.

"About 20 people were seriously wounded and we sent them to the National Hospital," the Cinnamon Grand manager said.

At the Shangri-La, eyewitnesses said they heard two loud blasts and staff reported some people had been killed. But details of the toll were not immediately available.

A tourist told the Australian Broadcasting Corporation Online that she was eating at the second-floor restaurant of the Shangri-La Hotel when two blasts hit about 10 seconds apart. 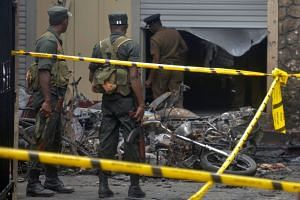 Sri Lanka explosions: Over 200 die in church and hotel blasts

She said the area had been full of visitors, including children. "There was just screaming, and everywhere I looked there was blood," she said.

"Everyone was just hiding, trying to work out what had just happened and what was going to happen and we just didn't know."

The Shangri-La said in a statement that the bomb hit at approximately 9am local time (11.30am Singapore time) at its Table One restaurant but did not give further details.

A huge blast also tore through St Anthony's Shrine in Colombo at around the same time.

Dashcam video footage showed fire and black smoke billowing from the church building. Motorists were shown driving away from the church, with some vehicles going against traffic trying to flee. Witnesses said many people died inside the church.

Shopkeeper N.A. Sumanapala told The New York Times that he ran inside the building to help. "It was a river of blood," he said. "The priest came out and he was covered in blood and he seemed to be covered in someone else's skin."

At least 160 people injured in the St Anthony's blast had been admitted to the National Hospital by mid-morning, an official told AFP.

Amid the violence, Finance Minister Mangala Samaraweera praised people queueing up to give blood, calling it a show of solidarity.

"In the midst of this tragedy, it's reassuring to see the outpouring of solidarity as people donate blood. Buddhists, Christians, Hindus, Muslims and others are donating because we are humans with the same blood and same spirit of compassion. Nobody can deny our common humanity," he tweeted.