DHAKA (AFP) - Bangladesh has protested to Myanmar over a new influx of refugees fleeing troubled Rakhine state after clashes between security forces and an insurgent group, an official said on Wednesday (Feb 6).

Bangladesh's Foreign Ministry summoned Myanmar's ambassador late on Tuesday to protest over the arrivals from Rakhine, already notorious following a military clampdown on Muslim Rohingya in August 2017 which sent more than 700,000 people across the border.

The new arrivals are from Rakhine Buddhist and other tribal groups, a senior Foreign Ministry official told AFP on condition of anonymity, without giving a figure.

"The number is increasing. Some people are already waiting on the border and they may also enter. We have asked them (Myanmar) to take effective and urgent steps so that violence is stopped," the official said.

A Bangladesh border guard official said the refugees had crossed in a remote hill area of Bandarban district in the south-east of the country.

Bangladesh is already struggling to cope with the 740,000 Rohingya Muslims who arrived after August 2017, adding to 300,000 who had fled earlier violence in Rakhine.

Now Rakhine's ethnic majority, who are Buddhist, are in conflict with the army they helped to drive out the Rohingya just 18 months ago.

On Jan 4, the Arakan Army (AA), a militant group calling for greater autonomy for Rakhine, killed 13 people in raids on police border posts. 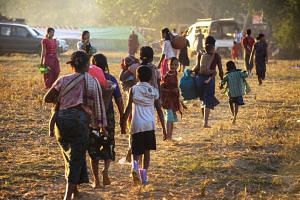 The army says 13 militants have been killed in reprisal attacks, while the United Nations says at least 5,200 people have been displaced by the violence.

An accurate death toll has been impossible to ascertain because the zone is under a near-blanket lockdown.

The fighting has added a new, complex dimension to the troubles in Rakhine that since 2012 have seen religious and communal riots, the mass exodus of Rohingya and killings across all ethnic lines.

The Bangladesh protest came after Hollywood superstar Angelina Jolie said on Tuesday that Myanmar must "show genuine commitment" to end violence that has driven the Rohingya into Bangladesh.

The UN is preparing to launch a new international appeal for nearly one billion dollars to look after the Rohingya.