The police hailed Saturday's raid, where security forces stormed a militant hideout outside Dhaka and killed three suspected Islamists, including a Bangladesh-born Canadian accused of organising last month's attack in Dhaka that left 22 people dead, as a major blow to extremists in the Muslim-majority country, which has been reeling from recent killings.

"This operation definitely will uphold confidence and the image of Bangladesh," Bangladeshi Prime Minister Sheikh Hasina told a news conference. "With this killing, one curse has been removed from our shoulders."

The authorities say that after returning from Canada in 2013, Tamim Chowdhury, 30, led a faction of the banned militant group Jamayetul Mujahideen Bangladesh (JMB), blamed for a series of recent attacks on religious minorities.

Global Affairs Canada, the country's foreign department, said in a statement it is aware of reports of Chowdhury's death.

"Canadian officials are in contact with the Bangladeshi authorities to gather additional information," a spokesman said. "No further details can be provided at this time."

"We're hopeful we can now capture and eliminate other extremists, including Zia," said assistant inspector-general of police Mohammad Moniruzzaman.

The police have announced a reward of US$25,000 (S$34,000) for information leading to the arrest of Zia, who was sacked from the army in 2011 for an aborted coup bid against Ms Hasina.

The Islamic State in Iraq and Syria (ISIS) terror group claimed responsibility for the July siege of the upmarket Dhaka cafe, in which gunmen held hostage mainly Western diners, including one American, before killing them.

Analysts say ISIS in April identified Chowdhury as its national commander in Bangladesh.

But the police say the home-grown JMB, which has pledged allegiance to ISIS, was behind the raid. They deny the presence of international militant groups. 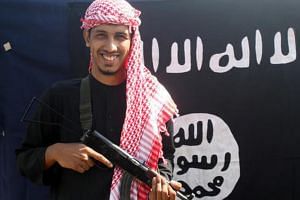 A series of police raids on suspected militant hideouts have killed at least 24 extremists since the cafe attack. Experts welcomed last Saturday's police raid but said the country, with its history of political instability, faces a long fight against Islamist extremism.

Critics say Ms Hasina's administration has been in denial about the nature of the threat posed by extremists and accuse her of trying to exploit the attacks to demonise her domestic opponents.

"Definitely Tamim's death is a major setback for the terrorists, especially in the short term," said Dr Abdur Rob, professor of politics and security issues at the private North South University. "(But) the incentives for regrouping will remain unless we can fix our politics."

Mr Kerry is set to arrive in Bangladesh today on his first official visit to try to deepen cooperation on counter-terrorism and other issues.

He will meet Ms Hasina and hold talks with his counterpart Mahmood Ali "on a broad range of issues including democracy, development, security and human rights", a senior US State Department official said.

Mr Kerry will then head to India to co-chair the regular US-India Strategic and Commercial Dialogue and hold talks with Indian Prime Minister Narendra Modi.

A version of this article appeared in the print edition of The Straits Times on August 29, 2016, with the headline 'Bangladesh police on the hunt for more militants'. Subscribe
Topics:
More
Whatsapp Linkedin FB Messenger Telegram Reddit WeChat Pinterest Print Copy permalink