DHAKA (REUTERS) - Bangladesh slapped a ban on more than one person riding pillion on a motorcycle on Monday (June 6), a day after the wife of a prominent security official was shot dead by three suspected Islamist militants riding a motorbike.

Mahmuda Aktar, the wife of Superintendent of Police Babul Aktar who is known for his security campaigns against militants, was stabbed and shot dead by the three in the southeastern port city of Chittagong on Sunday.

Four people have been picked up for questioning and the motorbike used in the killing has been recovered, Chittagong city Police Commissioner Iqbal Bahar told reporters. 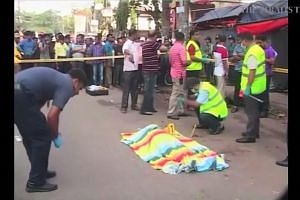 "Only two people are (now) allowed to ride a motorcycle, not three," Interior Minister Asaduzzaman Khan told reporters, adding motorcyclists will not even be allowed to carry a spouse and child, a common practice across South Asia.

Khan said the killing was meant to demoralise police officers and the government would look into the matter of security for their families. Also on Sunday, machete-wielding assailants killed a Christian grocer in a separate incident.

Both attacks appeared to be the work of Islamist militants who have killed at least 30 people, including religious minorities, liberal bloggers and academics, since February last year, police said.

Bangladesh imposed a similar ban on three riding a motorcycle - but later relaxed it - after two foreigners were shot dead a few days apart by masked men riding on motorcycles late last year.

Islamic State and al Qaeda have claimed responsibility for many of the 30 killings but the government denies that either group has a presence in Bangladesh and says home-grown radicals are responsible.

Analysts say a climate of intolerance in Bangladeshi politics has both motivated and provided cover for perpetrators of crimes of religious hatred.