HERAT, AFGHANISTAN (AFP) - At least 34 people were killed in western Afghanistan when their bus hit a Taleban roadside bomb, officials said on Wednesday (July 31), the same day a US peace envoy indicated a peace deal with the insurgents could be imminent.

Even in a conflict where civilians die daily, Wednesday's blast stood out as particularly devastating, as most of the victims were women and children.

The explosion ripped through the bus around 6am (9.30pm Singapore time) in Farah province, authorities said, along a busy highway to neighbouring Herat.

"It was dark, and the bus hit a mine," passenger Ali Juma told AFP from a hospital in Herat. "There were many casualties, martyrs and wounded people."

The explosion came amid a US push for peace with the Taliban that after several slow months now appears to be making progress.

US peace envoy Zalmay Khalilzad, who spent more than a week in Kabul, on Wednesday left Afghanistan for Pakistan before heading to Doha, where he is expected to hold a fresh round of talks with the Taleban.

After nearly 18 gruelling years, the US wants to quit Afghanistan in return for various security guarantees from the Taleban, including that the insurgents won't let terror groups operate in the country.

Khalilzad, who was formerly US ambassador to Afghanistan, said his visit to Kabul had been his "most productive" yet in his new role.

"I'm off to Doha, with a stop in Islamabad. In Doha, if the Taleban do their part, we will do ours, and conclude the agreement we have been working on," Khalilzad tweeted.

In another sign of progress, the Afghan peace ministry announced the government had formed a negotiating team for separate peace talks with the Taleban, ahead of potential talks in Oslo in August.

The move is hugely significant, as the Taleban have until now refused to negotiate directly with the government of President Ashraf Ghani, which they consider illegitimate. 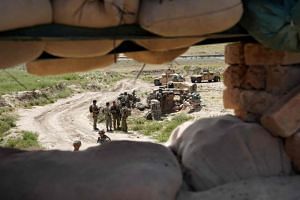 US says latest Taleban talks 'most productive' so far

The Taleban did not immediately respond to the announcement of the 15-member delegation.

The push to end the Afghan war has ignited widespread concern among Afghans that in Washington's rush to exit its longest war the Taleban will be returned to some semblance of power.

According to a UN report released Tuesday, 1,366 civilians were killed and another 2,446 wounded during the first six months of 2019.

Afghan officials blamed the Taleban for Wednesday's explosion, saying they had planted a bomb along a busy highway with the aim of hitting security forces.

The insurgents did not deny or claim involvement, saying they would investigate the "sad incident".

Muhibullah Muhib, a police spokesman for Farah province, said all the victims were civilians, mostly women and children.

"A passenger bus travelling on the Kandahar-Herat highway hit a Taleban roadside bomb killing 34 innocent people and wounding 17 others," he said.

Sediq Sediqqi, a spokesman for the Afghan presidency, confirmed the toll, blaming the incident on the Taleban, while Nasrat Rahim, the interior ministry spokesman, called the blast a "barbaric act of the terrorists".

"Sadly, this senseless loss of life is all too common in Afghanistan," Onno van Manen, the Afghanistan director for Save the Children, said in a statement.

"Just in the past month hundreds of children have been killed or injured as a result of explosive weapons." The Taleban, who now control or influence about half of Afghanistan's territory, recently signed on to a vague pledge to reduce civilian casualties, but violence has continued unabated.

Civilians have long paid a disproportionate price in the nearly 18 years since the US invaded Afghanistan, and last year was a record for civilian casualties.

Numbers are down by 27 per cent so far this year, but children accounted for almost a third of the overall total of civilian deaths and injuries.

The bloodshed is only expected to worsen now that official campaigning for Afghanistan's presidential election, set for Sept 28, is under way.

At least 20 people were killed Sunday, the first official day of the campaign, and 50 wounded when a suicide attacker and gunmen targeted the Kabul office of Afghan President Ashraf Ghani's running mate, Amrullah Saleh.