COLOMBO • Nine suicide bombers mostly from educated, middle-class backgrounds carried out the attacks in Sri Lanka that killed at least 359 people on Easter Sunday, the authorities said yesterday as they warned of an ongoing terrorist threat and continued making arrests.

The bombers, one of whom was a woman, were all Sri Lankans, officials said. But the authorities were continuing to investigate whether the Islamic State in Iraq and Syria (ISIS) group, which on Tuesday claimed responsibility for the blasts, had provided more than symbolic support, such as by training the attackers or making the bombs.

As the United States' Federal Bureau of Investigation arrived to assist in the investigation, the US Ambassador to Sri Lanka, Ms Alaina Teplitz, said there are believed to be "ongoing terrorist plots".

"There could be still a few people out there," he said at a news conference. "Right now, we are asking people to be vigilant. Within the next few days, we will have the situation totally under control."

Mr Wijewardene said of the attackers: "They're quite well-educated people. We believe that one of the suicide bombers studied in the UK and then later on did his postgraduate in Australia before coming back to settle in Sri Lanka."

He said the bombers were from different parts of Sri Lanka, but did not elaborate. Sixty people have been arrested in connection with the attacks, including Mohamed Ibrahim, a wealthy businessman who imported spices and owned a home in Colombo's Dematagoda neighbourhood, which the police raided on Sunday.

Two of his sons were suicide bombers, and it was his daughter-in-law who detonated explosives when police officers went to the house, killing three of them and herself.

Local media said leader Zaharan Hashim had formed the National Thowheeth Jama'ath, an obscure Islamist extremist group based in the eastern part of the country, in 2014. 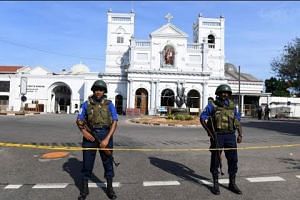 But there was still confusion yesterday about whether that group, or a splinter organisation, had carried out the Easter attacks.

Mr Wijewardene said Sri Lanka's intelligence agencies had assessed that the deadly attacks last month on mosques in Christchurch, New Zealand, "motivated these people to carry it out on Easter Sunday".

Officials said they were still trying to determine whether the attackers had links to ISIS. The terror group has released a video showing Zaharan leading masked, black-clad disciples as they pledged allegiance to the organisation.

During a national address on Tuesday, President Maithripala Sirisena tried to deflect criticism that he was at least partly responsible for the security failure. He acknowledged that "there was an intelligence report about the attack", but said he was "not kept informed" about it by his subordinates.

Yesterday, he asked Defence Secretary Hemasiri Fernando and Inspector-General of Police Pujith Jayasundara to resign. Many lawmakers dismissed assertions that the President would not have known about the threat memo, saying that blame for the security lapse should go all the way to the top.

The police yesterday found a "suspicious bag" at a restaurant in Negombo, near St Sebastian's Church, where around 100 people were killed on Sunday. The bag was destroyed in a controlled explosion.

A version of this article appeared in the print edition of The Straits Times on April 25, 2019, with the headline 'All nine suicide bombers educated Sri Lankans, and one was a woman'. Subscribe
Topics:
More
Whatsapp Linkedin FB Messenger Telegram Reddit WeChat Pinterest Print Purchase Article Copy permalink