KATHMANDU (AFP) - A year after an earthquake flattened her home in Nepal, Menuka Rokaya still lives in a tent with her husband and nine-month-old baby as they await even a sliver of a US$4 billion (S$5.4 billion) aid fund.

"We have lived like this with a baby through monsoon and winter," says Rokaya, one of an estimated four million people who are still homeless.

"The quake spared us, but it is difficult to survive now. 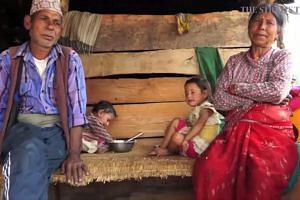 Nepal marks one year since quake amid rising frustration 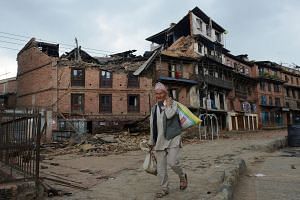 In Pictures: Nepal quake, one year on

"Earlier, many people used to come here to help us. But... they have all disappeared now," she told AFP as she nursed her young daughter.

The world rallied to donate money to help the desperately poor Himalayan nation after the 7.8-magnitude quake struck on April 25 last year.

Nearly 9,000 people lost their lives in the disaster while over half a million homes were destroyed.

But while US$4 billion in aid has been raised, wrangling between political parties over control of the funds has meant that most victims have received nothing beyond an initial small payout.

Rokaya, who was six months pregnant when the quake brought down her home, now lives with her family in a tent that offers little protection from the cold and the rain.

"We haven't heard anything about compensation. We don't have any money, how can we rebuild?," said Rokaya, who lives in a camp near Kathmandu airport.

The family has to survive on the US$10 that her husband earns a day as a tea-seller and meals are cooked on a stove inside their tent. They have to wash in a communal toilet on the camp site.

An estimated four million people are still living in sub-standard temporary shelters, according to the International Federation of Red Cross and Red Crescent Societies.

Many were living hand-to-mouth even before the quake, which dealt a huge blow to Nepal's already fragile economy.

To make matters worse, protesters angered by the terms of a new national constitution mounted a blockade at the Indian border - the main entry point for fuel and other goods - creating crippling shortages that lasted for months.

Tourism also took a nosedive as prospective visitors cancelled bookings following dozens of deaths in quake-triggered avalanches at Everest base camp and along the popular Langtang trekking route.

The famous royal squares of the Kathmandu Valley reopened to the public last June and masons have begun work on restoring other historic sites including the fifth-century Changu Narayan complex, but officials say it will take years to complete.

After months of bickering, the government finally established a National Reconstruction Authority (NRA) in December to oversee rebuilding and distribute funds.

Until then, rebuilding had effectively been put on hold because the government had instructed people to follow specific quake-resistant designs to qualify for aid - but had not released the blueprints.

"You had many organisations... willing to support housing reconstruction, but they had to act in a vacuum, a policy vacuum. So they could not start work," said Jennifer Duyne, who heads the international and Nepali donor reconstruction effort.

Even aid organisations that had started to rebuild schools and health facilities were told to pause their efforts until the new body could review them, a process that took months.

And while the government promised US$2,000 for every home destroyed, fewer than 700 families have received the first instalment of US$500.

But thousands of survivors have chosen to risk losing the government aid, and have instead taken out loans or turned to charities for help.

In Ramechhap district, east of Kathmandu, where 40,000 houses were damaged, Gurkha soldiers have been hard at work breaking rocks and laying down concrete to construct schools and build homes for veterans.

Famed for their ferocity and valour, the 2,500-strong Gurkha brigade largely made up of soldiers recruited mainly in Nepal, has been part of the British army for 200 years and served in Afghanistan and Iraq.

They plan to complete work on 1,200 houses by next year under a scheme run by the Britain-based Gurkha Welfare Trust.

"We are trying to help, but it won't be enough because people need help all over Nepal."

For farmer Bhoj Raj Sunuwar, the Gurkhas, who arrived in his far-flung village of Bhuji days after the earthquake and before government officials showed up, have been a blessing.

Sunuwar, whose father served with them, has lived with his family in a temporary shelter since the disaster but is now looking forward to having a roof over his head thanks to their help.

"If they were not here we would be forced to spend another year in a shelter," he told AFP.

"I have no hope from the government."