Mr Agus Harimurti Yudhoyono has no political experience, but can bank on bibit, bebet and bobot - Indonesian for heredity, social standing and quality respectively - to propel him in the polls.

As the eldest son of former president Susilo Bambang Yudhoyono, he has a famous last name.

And at 38, Mr Agus, who has a master's degree from Singapore's Nanyang Technological University (NTU), is the youngest of the candidates.

The former army major had quit his nearly 16-year military career to run on his father's Democratic Party ticket, pairing up with veteran bureaucrat Sylviana Murni.

Mr Agus' Javanese ethnicity, clean military track record and politically powerful family all give him a slight edge over contender Anies Baswedan if the incumbent, Jakarta governor Ahok, were to drop out of the race, Indonesian Institute of Sciences analyst Siti Zuhro told The Straits Times. 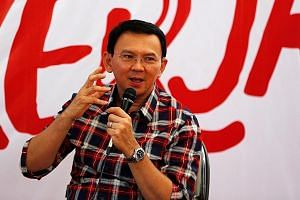 Vying to be Jakarta governor 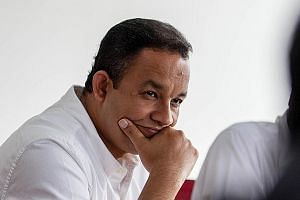 Being tall and handsome helps too. The husband of model Annisa Pohan became a trending topic on Twitter when he announced his candidacy, with the local media raving about his good looks.

"Jakarta will soon get a handsome governor", said entertainment site Storibriti.com. "Can Agus bring female voters to their knees?" said an opinion piece in The Jakarta Post.

In Indonesia, the father-of-one fits the bill of someone blessed with the three Bs - criteria used in Javanese palace tradition when choosing rulers and spouses.

In the capital, where more than a third (35 per cent) of voters are Javanese, it is not uncommon to use such traditional yardsticks, Dr Siti said.

"Indonesians like to choose leaders who are straightforward, decisive and firm. They also welcome young and educated leaders who understand the needs of the people. There is a possibility Agus meets their criteria."

Mr Agus graduated from the National Military Academy in 2000, and is a holder of several master's degrees, including strategic studies from NTU in 2006 and Public Administration from Harvard University's John F. Kennedy School of Government in 2010.

His surprise candidacy appears to signal his father's move to groom him as a political heir.

The stakes are high. If he wins, the dynasty survives. If he loses, he has no chance of returning to the military, though he can get a leadership post in his party and gun for presidential elections in the future, analysts said.

Mr Agus has promised "Jakarta for the People", and to tackle the perennial problems of flood and traffic congestion in the gridlocked city of 10 million people.

He gave a laundry list of other developments, from growing the city's economy and reducing crime to strengthening law enforcement and building an orderly, transparent and accountable government.

He said in a tearful speech: "The job is not easy, with hefty challenges, but I believe we can build a better Jakarta together."

A version of this article appeared in the print edition of The Straits Times on November 21, 2016, with the headline 'Son of ex-president has 3 Bs that give him an edge'. Subscribe
Topics:
More
Whatsapp Linkedin FB Messenger Telegram Reddit WeChat Pinterest Print Purchase Article Copy permalink