Singapore had offered humanitarian aid and to assist Indonesia with relief efforts in areas affected by Friday's magnitude-7.4 quake and tsunami after the disaster occurred.

Defence Minister Ng Eng Hen said both C-130 aircraft will remain in Sulawesi to transport survivors to other Indonesian cities, as requested by the Indonesian military.

"If needed, the SAF (Singapore Armed Forces) will do more to help our brothers and sisters in Indonesia through this natural disaster," Dr Ng said in a Facebook post last night.

Indonesia's Coordinating Minister for Political, Legal and Security Affairs, Mr Wiranto, on Monday said that air transport - particularly the C-130 - was the most pressing need for relief efforts.

The plane is now one of the few able to operate from the airport in Palu, the provincial capital, because about 200m of its runway has been ruined by the quake.

The SCDF is also prepared to send a separate team of officers to help with search and rescue operations as well as disaster relief efforts, Singapore's Ministry of Foreign Affairs said in a statement yesterday.

The ministry added that the Singapore Government will also be contributing US$100,000 (S$137,000) as seed money to kick-start a fundraising appeal launched by the Singapore Red Cross (SRC). 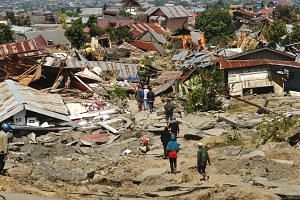 Donations for the Sulawesi quake victims have been pouring in.

The SRC said it has raised about $80,000 from its online appeal - with close to $10,000 collected within five hours of the launch on Monday. Walk-in donors and cheques will add to that amount.

He added that besides air transport, water treatment equipment, tents, power generators, field hospitals and fogging to avert diseases were the other urgent needs.

He also said two Singaporeans were recently evacuated from Palu.

Mr Ng Kok Choong, who was there to take part in a paragliding competition, returned home on Sunday, while the second Singaporean was evacuated to Makassar yesterday.