Republic can offer expertise that determines how well a project succeeds, says professor

As a developed country not short of roads and ports, Singapore may not seem like a natural partner for China's One Belt, One Road (Obor) initiative, for which infrastructure building is a key pillar.

But Singapore's role in the initiative, especially in South-east Asia, can be one of providing the less visible, behind-the-scenes expertise that determines how well a project succeeds, said former government chief economist Tan Kong Yam.

"You should not be mistaken that if a railway is built in Indonesia, Singapore has no role to play," he told about 50 academics, diplomats and students at Beijing Foreign Studies University yesterday.

"Singapore may not be building the railway, but the masterplanning, the financing, everything is done in Singapore," he said.

Professor Tan was one of four speakers at the public session of the 12th China-Singapore Forum, which looked at how China and Singapore can cooperate on the Obor initiative. The two-day event, which ended yesterday, was jointly organised by the Chinese People's Institute of Foreign Affairs and the National University of Singapore's East Asian Institute, ahead of Beijing's Obor summit on Sunday. 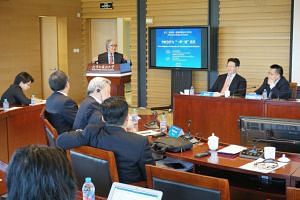 Tommy Koh rebuts view that Singapore has acted against China

Prof Tan said China's heft and economic power have made potential partners for its plan to build a trade route linking Asia, Africa and Europe wary of its intentions, even if they are good.

"The cute panda bear has evolved into a huge, great panda bear; it might be friendly, but if it simply lies down, it's so big that it might inadvertently crush the legs of a deer nearby," he said.

You should not be mistaken that if a railway is built in Indonesia, Singapore has no role to play... Singapore may not be building the railway, but the masterplanning, the financing, everything is done in Singapore.

But such concerns can be allayed by partnering a "squirrel in the jungle" like Singapore, he added, a country that is nimble, non-threatening, and can serve as a go-between and an interlocutor.

Agreeing, Singapore Business Federation chief executive Ho Meng Kit noted that some 60 per cent of Asean projects are already financed mainly by Singapore-based banks, and the Republic has a deep ecosystem of logistics, project development and service firms.

Mr Ho said China can consider setting up a planning office in Singapore so Maritime Silk Road projects can tap the island's expertise.

Another speaker was deputy director Peng Zhiming of the Chongqing Connectivity Initiative (CCI), the third Sino-Singapore government- to-government project after the Suzhou Industrial Park and Tianjin Eco-City. He said both sides can cooperate in areas such as financing as China opens up its western interior. The CCI, which aims to improve Chongqing's transport and service links, is a priority demonstration project for the Obor initiative.

"Chongqing is different from the Suzhou and Tianjin projects as it's not a business park or special zone," said Mr Peng. "Rather, it centres on Chongqing as a project operations centre, and its soul and spirit are in institutional innovation."

A version of this article appeared in the print edition of The Straits Times on May 11, 2017, with the headline 'S'pore 'can partner China in One Belt, One Road initiative''. Subscribe
Topics:
More
Whatsapp Linkedin FB Messenger Telegram Reddit WeChat Pinterest Print Purchase Article Copy permalink