The luxury yacht allegedly bought with funds stolen from Malaysia's state fund 1MDB yesterday docked off Port Klang, amid speculation about what the government plans to do with it.

The vessel, which left Batam on Monday to sail to Port Klang, was escorted by the Malaysian navy's guided-missile frigate KD Jebat and three smaller marine police vessels after it entered Malaysian waters.

As soon as it docked at the Boustead Cruise Centre, Malaysia's marine police took charge of the security of the US$250 million (S$342 million) Equanimity.

The Straits Times understands that a crew appointed by the United States Department of Justice (DOJ) arrived with the superyacht yesterday.

The Malaysian government has yet to decide if the vessel would be opened for public viewing, a source said. "At the moment, the consensus is that the media will only be allowed to enter the premises of the cruise centre and take photos from afar, pending a decision by Prime Minister Mahathir Mohamad to allow them on board Equanimity," the source said yesterday morning.

"It is a super-expensive yacht; (the authorities) would not want the value to depreciate if anything is damaged during the viewing," the source added.

It can take up to 18 guests and has a gym, spa, sauna, jacuzzi, Turkish bath and 20m-long pool.

Finance Minister Lim Guan Eng has said that the government plans to sell the yacht in a bid to recover the money allegedly stolen from 1Malaysia Development Berhad (1MDB). But some lawyers cautioned Mr Lim against saying that the yacht would be sold off as the Malaysian government has yet to prove that the vessel was bought with 1MDB funds.

The DOJ has said that US$4.5 billion of 1MDB's funds was embezzled and used to fund purchases of homes and paintings, and make movies, including the Wolf Of Wall Street starring Leonardo DiCaprio.

A tussle is ongoing between the Malaysian authorities and the superyacht's owners over the legality of Malaysia's move to seize the vessel from Indonesia. 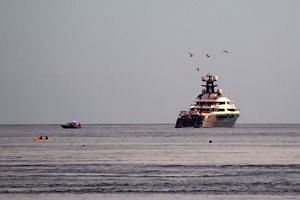 Mr Jeremy Joseph, from a team of lawyers appointed by Malaysia's Attorney-General's Chambers to work on the case, was one of those who boarded the vessel at Port Klang yesterday. After being on board for 21/2 hours, he described the Equanimity as ostentatious, beautiful and very well-maintained, with marble, leather and timber furnishing.

"We are not allowed to wear shoes and we have to put on shoe covers in order to protect (the flooring)," he said, adding that it will take the government an estimated RM3 million (S$1 million) monthly to maintain the vessel.

The state fund 1MDB, now controlled by officials appointed by the Pakatan Harapan government, yesterday claimed direct ownership of the superyacht. The previous 1MDB management had denied that its funds were stolen or that it had any links to the Equanimity.

"The defendants who claim that they are the registered owners have the opportunity to turn up in court to defend the claim and establish their ownership and that issue will be determined by the Admiralty Court in Kuala Lumpur," said lawyer Sitpah Selvaratnam, who is also part of a team appointed by the Attorney-General's Chambers.