DERA ISMAIL KHAN (Pakistan) • A faction of Pakistan-based sectarian militants Lashkar-e-Jhangvi (LeJ) has claimed responsibility for twin bombs that hit a market in the north-western town of Parachinar, killing at least 50 people ahead of the holiday marking the end of Ramadan.

Video footage after the attack showed civilians dragging bleeding victims to waiting ambulances in the chaos that came when the bombs exploded before the sundown meal breaking the daily Ramadan fast.

"We have received 50 bodies so far, and 250 were wounded," said Dr Sabir Hussain, medical superintendent of Parachinar Hospital. Sixty of the seriously wounded had been transferred to the larger city of Peshawar, he added.

LeJ Al Alami, which has partnered with Islamic State in Iraq and Syria to carry out attacks in Pakistan, said it has previously "warned the Shia community of Parachinar... to stop staining your hands with the blood of Sunnis in Syria".

It repeated the demand in the statement, saying that "otherwise in the coming days you will face such hate-fuelled and deadly attacks that you will not be able to stand them". 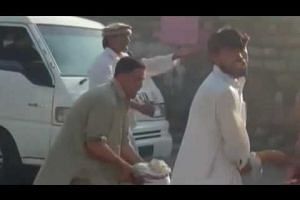 Hundreds of Pakistanis - many of them Shi'ites believed to have been recruited by Iran - have gone to fight in Syria to defend the government of Teheran's ally, President Bashar al-Assad.

The market bombings in Parachinar late last Friday afternoon came on a particularly deadly day for Pakistan as both Sunni and Shi'ite Muslims prepared to observe the Eid al-Fitr holiday marking the end of the holy fasting month of Ramadan.

Another bombing in the south-western city of Quetta killed 13 people and a drive-by shooting killed four police officers in the southern megacity of Karachi last Friday.

Both of those attacks were claimed by another militant group, the Jamaat ur Ahrar faction of the Pakistani Taleban.