PARIS - The world association of newspapers and news publishers yesterday (Jan 18) registered its concern with President Rodrigo Duterte over the Philippines' move to shut down leading online news outlet Rappler.

The order on Jan 11 to revoke Rappler's registration, because it had breached foreign ownership rules, has been widely denounced as an effort to muzzle news organisations critical of the Duterte administration.

In a letter addressed to Mr Duterte yesterday, the World Association of Newspapers and News Publishers (WAN-IFRA) and the World Editors Forum called on the premier to take steps to rescind the decision for Rappler's closure.

"While acknowledging your country's right to decide on limits of foreign ownership of media companies, the closure of Rappler appears to be a political manoeuvre and sends a chilling message to independent journalists across the country," wrote Michael Golden, President of WAN-INFRA and David Callaway, President of the World Editors Forum.

Mr Duterte has denied he had anything to do with the decision by the Philippine Securities and Exchange Commission (SEC) to revoke Rappler's certificate of incorporation.

But in media reports he has called Rappler a "fake news outlet" that published stories "rife with innuendos and pregnant with falsity,".

On Wednesday, his spokesman suggested Rappler reporters could reinvent themselves as bloggers instead. 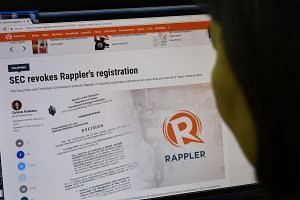 Rappler, a popular and pioneering news site, is known for being critical of Mr Duterte's brutal war on drugs, which has claimed thousands of lives.

It has denied any wrongdoing and plans to appeal the SEC decision.

In their letter yesterday, the world's publishers also noted that Rappler's closure would discourage investment in an important industry, and that Philippines society "risks losing a vital independent voice".

"Its closure would be an indelible stain on the Philippines record of freedom of expression," the letter concluded.

WAN-INFRA and the World Editors Forum collectively represent 18,000 publications, 15,000 online sites and over 3,000 companies in more than 120 countries.