THE HAGUE (REUTERS) - The International Court of Justice, the United Nations' highest court, will issue a decision on a request for emergency measures in a genocide case against Myanmar on Jan 23, the Gambian Ministry of Justice said on Twitter on Tuesday (Jan 14).

The ICJ did not immediately respond to a request for comment.

Gambia has accused Myanmar of violating the 1948 Genocide Convention in a military campaign that expelled more than 730,000 Rohingya from the country.

It asked the ICJ to order "provisional measures" to prevent more harm, a first step in a legal case that is expected to go on for years.

Myanmar's de-facto leader, Ms Aung San Suu Kyi, travelled to The Hague last month to defend her country against the charges. She denied that genocide was taking place and said the court has no jurisdiction to hear the case.

Ms Suu Kyi, once championed in the West for her decades-long fight for democracy for Myanmar, said Myanmar did investigate and prosecute soldiers and officers accused of crimes. She said that under those circumstances, the court should not intervene.

Gambia lodged its lawsuit after winning the support of the Organisation for Islamic Cooperation (OIC), which has 57 member states. Only a state can file a case against another state at the ICJ.

Gambia has said Myanmar cannot be trusted to bring alleged military perpetrators of crimes against the Rohingya to justice.

The International Court of Justice @CIJ_ICJ will on Thursday 23rd January be delivering its decision on the Provisional Measures requested by The Gambia in its #Genocide case against Myanmar. pic.twitter.com/qbaK3lK74N

It has asked the court to order provisional measures for Myanmar to stop its forces committing "all acts that amount to or contribute to the crime of genocide" against the Rohingya including killing, rape and destruction of homes and villages. 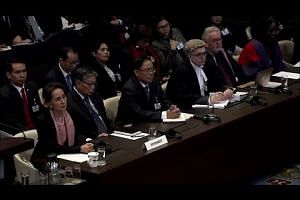 Gambia also asked judges to order Myanmar to ensure any evidence of atrocities is preserved.

The ICJ's decisions are binding and not subject to appeal, though the court has no means of enforcement and countries have occasionally ignored them or failed to adhere fully.