JAKARTA (THE JAKARTA POST/ASIA NEWS NETWORK) - The average price of apartments and office space in Jakarta has yet to increase despite the completion of the highly anticipated MRT, according to property services firm Colliers International Indonesia, adding that an uptick is expected in the future.

"The asking price (for apartments around MRT stations) has increased, but that does not mean that selling prices have increased," said Mr Aldi Garibaldi, senior associate director investment service at Colliers International Indonesia.

According to Colliers International, the gap between a large supply and soft demand was the major cause of stagnant growth for apartment prices in Jakarta in the first quarter of 2019.

The firm, which offers advisory and research services, expects growth to ease to 3 to 4 per cent this year on the back of weak demand and uncertainty in a political year, and increase gradually by 5 to 6 per cent from 2020 to 2021.

"We project that until the end of 2019, the outlook for apartment (prices) would be somewhat stagnant because many investors are taking the wait-and-see stance," Colliers International Indonesia senior associate director Ferry Salanto said.

Bank Indonesia's (BI) macroprudential policy in terms of relaxation of loan-to-value (LTV) has been unable to boost the sales of property either because the interest rates for home mortgages were still high.

"Even though the down payment is low, if the interest rates remain high, it would not be able to boost property sales," Mr Ferry said. 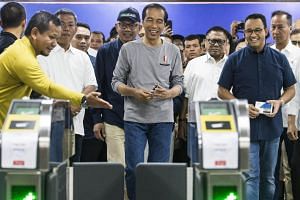 The Jakarta administration has planned to raise the taxable value of property of buildings affected by the MRT project by up to 30 per cent.

The increase will apply to areas along Jl Jendral Sudirman in Central Jakarta, which will see the tax increase to 97.5 million rupiah (S$9,300) per square metre from the current 75 million rupiah.

Apart from weak demand for apartments, the office market is also experiencing an oversupply, with about 680,000 sq m of office space expected to go on the market this year, 7.3 per cent higher than in 2018.

In the first quarter of 2019, the average occupancy rate for office buildings in the central business district (CBD) area was registered at 82.5 per cent. Colliers forecasts that by the end of this year, with huge additional supply, the occupancy rate would drop to 81.5 per cent.

Similarly, outside the CBD area, the occupancy rate is expected to drop 3.5 to 4 per cent by the end of 2019, from 84 per cent in the first three months this year.

Co-working spaces have mushroomed in Jakarta, particularly in the CBD area. Companies that provide shared workspaces are being aggressive in renting office space not only for technology companies but also for big conventional firms.