MANILA, Philippines (WASHINGTON POST) - On a sunny afternoon in November, a crowd gathered outside the Supreme Court in Manila to honour a long-dead dictator.

They were fans of Ferdinand Marcos, the man who ruled the Philippines for two decades before being toppled by the "people power" revolution of 1986. He fled to the US with his footwear-obsessed wife, Imelda, and a not insignificant portion of the country's wealth.

Since his death in 1989, the Philippines has debated what to do with his remains. His embalmed corpse has been stored since 1993 in a glass casket in his home province. Those assembled outside the court wanted to rebury him at Manila's Cemetery of Heroes.

On Friday (Nov 18), thanks to President Rodrigo Duterte, they got their wish.

On the morning of Nov 18, Marcos was interred in a private ceremony on military land, a striking symbol of the nostalgia for the kind of strongman politics that's fuelling the global rise of the populist right.

The move fulfilled a campaign promise made by Mr Duterte, who has praised the former dictator and says the reburial will "heal" the country; millions of Filipinos disagree.

"Ferdinand Marcos was a thief, a murderer and a dictator," said Vice President Leni Robredo in a statement issued on Friday. "He is no hero." 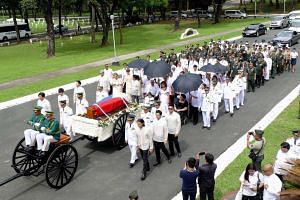 The debate over the ceremony shows a nation divided on the weight of its authoritarian past and what that means for the future.

For many Filipinos, the Marcos era was a horror that can't and won't be forgotten.

Marcos was elected in 1965 and declared martial law in 1972, during his final term in office. The suspension of democracy brought extra-judicial killing, forced disappearances and torture.

Meanwhile, the Marcoses grew ridiculously, ostentatiously rich. They are believed to have made off with billions of dollars.

But in the three decades since Ferdinand and Imelda fled, leaving behind her infamous shoe collection, their clan has largely escaped punishment and, in recent years, have even returned to public life.

Imelda is member of Congress, daughter Imee is a governor, and son Ferdinand junior, known as Bongbong, is an influential senator who narrowly lost the race to be vice-president in Mr Duterte's government.

Support for the family comes mostly from those young enough not to remember martial law and those who deny or downplay what happened during Marcos' rule.

"During martial law there were a lot of abuses that were committed, but I don't think they were sanctioned by the president," he said.

Rehabilitating the Marcos legacy serves two political purposes: It helps secure an alliance between the new president and a powerful political clan. It also plays to a longing for a national saviour who can restore "discipline," a sentiment that's fuelled Mr Duterte's rise.

Mr Duterte, once nicknamed "the death squad mayor", swept to power last summer on a promise to "kill all" the country's drug users and dealers and completely rid the country of crime.

His bold promises impressed Filipinos fed up with the corruption of the country's ruling class. Thirty years after the "people power" revolution, about one quarter of people live in poverty - Mr Duterte vowed to help by tackling social ills.

As president, Mr Duterte has delivered the bloodshed he promised. Thousands of people identified as suspects have been killed, often after being named on "drug lists" compiled by neighbourhood officials and the police.

Faced with criticism of his "drug war", Mr Duterte has lashed out at critics at home and abroad, using sexist language to shame a senator who challenged him, lecturing President Barack Obama on colonialism and giving the European Parliament the middle finger and a big "(Expletive) you."

The people gathered outside the court in Manila saw Mr Duterte as Marcos' heir, and like him, creating an era of pride and stability, they said.

They insisted that Marcos seized power because he had to, that he had no choice. "If there were no problems, there would not have been martial law," said Ms Grace Koo, 52.

Ms Koo said today's drug problem justified a similarly strong response. "It's good, that there's lots of killing," she said."There should be due process, but there's millions of people (using drugs), how long would that take?"

That's not far from what the president himself has said. Mr Duterte recently said he may be forced to suspend the writ of habeas corpus to enable arrests without warrants, a plan critics called a precursor to martial law.

Some Marcos-loving supporters said that would be fine.

"Martial law was the best time that happened in the Philippines," said Mr Artemio Lachica, a 74-year-old retired teacher.

Mr Duterte will follow in Marcos' footsteps, for the good of the nation, because he has no choice, he said. "Duterte wants to duplicate what Marcos has done."