In this editorial, the paper says voters can expect two very contrasting campaign styles as both Jokowi and Prabowo camps gear up for next year's election.

JAKARTA (THE JAKARTA POST/ASIA NEWS NETWORK) - Next year's presidential election is shaping up to be a repeat of what happened in 2014, with incumbent President Joko Widodo squaring off against Gerindra Party chairman Prabowo Subianto.

This time, though, the odds are stacked against Mr Prabowo. With the benefit of the incumbency and nine political parties standing behind Mr Joko, better known as Jokowi, many expect the presidency will be a shoo-in for him.

With the likely outcome more or less determined, pundits and political observers are now more interested in how the victory would be secured, and that's what made the search for both campaign team leaders so interesting to watch. After considering former Indonesian Military (TNI) generals to head his campaign team, President Joko decided over the weekend to name businessman Erick Thohir as his campaign chairman.

And just like his decision to name Mr Ma'ruf Amin as his vice presidential pick, Mr Joko's move to choose Mr Erick was a master stroke that would give him the aura of invincibility. Mr Joko wants to make sure that voters know that he has all the best men behind him.

Without a doubt, Mr Erick is the man of the hour who is basking in the success of the Asian Games, which not only placed the country back on the global sports map, but also improved the nation's image around the world.

It also helps that Mr Erick is a young and successful businessman who can easily connect with millennial voters. Mr Joko will rely on him to clinch his second victory next year. After picking a septuagenarian Muslim cleric who, on paper, could bring in more Muslim voters, Mr Joko risked alienating young voters who could have been put off by his move.

Mr Joko appeared to have been convinced that having retired military generals running his operation would not look good from a public relations standpoint - despite reports that, behind the scenes, he hired some of the most experienced military hands to run the day-to-day operations of his re-election campaign. 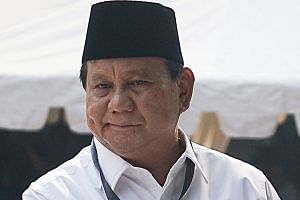 Mr Prabowo, on the other hand, stuck to the old playbook of having a military man run his operation. After considering former president Susilo Bambang Yudhoyono, a former military general, his son Agus Harimurti and National Mandate Party (PAN) chairman Zulkifli Hasan, the Gerindra chairman settled for Mr Djoko Santoso, who was the TNI commander under Dr Yudhoyono.

While Mr Joko's decision to pick Mr Erick could help expand his base, Mr Prabowo's move to have Mr Djoko as his campaign chairman only goes to show that he is determined to have his second presidential bid controlled by Gerindra itself. Mr Djoko is a Gerindra politician who joined the party in 2015 after retiring from the military.

With these two contrasting figures leading the presidential campaign in the next eight months, it will be interesting to see the different strategies they unleash. We can expect a media-savvy, social-media driven operation versus classic, military-style vote-canvassing. Let the voters decide.