PETALING JAYA - The wife of Cradle Fund chief executive officer Nazrin Hassan and her two sons from her first marriage are expected to be charged on Monday (March 4) with murdering the Malaysian venture capital firm's founder.

Selangor Criminal Investigation Department chief Fadzil Ahmat said Samirah Muzaffar, 45, and the two teenagers, aged 15 and 17, were detained at their home at about 6.45am on Monday, The Star Online reported.

"They are expected to be charged at the Petaling Jaya Magistrate's Court at 2pm today," said Mr Fadzil.

Mr Nazrin, 45, was found dead in a fire at his double-storey house in Mutiara Damansara in Selangor's Petaling Jaya city on June 14, 2018. He was found with 30 per cent burns on his body.

According to a family friend, Mr Nazrin had complained of a migraine that afternoon and went to bed after taking some medication.

It was initially believed that Mr Nazrin died from injuries suffered when his mobile phone exploded.

Police reclassified the case as murder, following a forensic investigation by the Fire and Rescue Department. Mr Nazrin's remains were exhumed on Oct 8 for a second post-mortem. 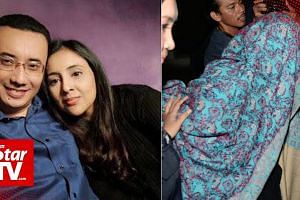 A police source told Malay Mail that they are also planning to arrest the family's maid, who is a suspect in the case.

"We believe the maid is back in Indonesia," the source said.

Malay Mail reported in September last year that one of Samirah's sons was detained for questioning after a puncture wound - believed to be caused by an arrow - was found on the dead man's neck. Sources told the news site that the two stepsons were members of their school's archery club.

Cradle is a Finance Ministry company that looks into developing entrepreneurs and the Malaysian start-up ecosystem. It was the agency that gave early funding to companies like ride-hailing pioneer Grab (previously MyTeksi) and fintech start-up iMoney.

Mr Nazrin leaves behind his wife Samirah, their young son, three stepsons and a son from a previous marriage.

Several people have since been remanded and released in the murder investigation, including Samirah's former husband.