KUALA LUMPUR (THE STAR/ASIA NEWS NETWORK) - While newly elected lawmaker Anwar Ibrahim is sure to steal some of the limelight with his quick return on Monday (Oct 15) to the Dewan Rakyat, the main focus of Malaysia's new parliamentary session will be the tabling of the Budget on Nov 2.

It will be Pakatan Harapan's first Budget since it won the May 9 general election, and it will be a perfect opportunity for the new government to "walk the talk".

The second meeting of the first term of the 14th Parliament sitting will last for 30 days, from Monday to Nov 29.

Lawmakers will have their hands full.

The first order of the day on Monday will be the swearing in of Datuk Seri Anwar, who has made it in the nick of time to join the second meeting of the 14th Parliament. The 71-year-old won 72 per cent of the vote at the Port Dickson by-election last Saturday (Oct 13).

Mr Anwar's swearing in will be followed by the debate on Prime Minister Mahathir Mohamad's much-publicised speech at the United Nations General Assembly in New York last month.

Foreign Minister Saifuddin Abdullah said the Prime Minister's UN speech would be debated, as it would form the nucleus of a Foreign Policy Framework.

He said Tun Mahathir had focused on an adherence to neutrality and non-alignment, as well as a "prosper thy neighbour" policy.

Datuk Saifuddin also explained that the Prime Minister emphasised the need for good relationships with major powers while making a stand on contentious issues involving Palestine, the Rohingya and trade war between global powers.

"Wisma Putra will use input from the Parliament session to form the framework," the minister said.

Also on the agenda for the new sitting is the midterm review of the 11th Malaysia Plan or 11MP (2016-2020) on Thursday. The 11MP was tabled in Parliament by former prime minister Najib Razak in May 2015.

Other highlights will include the likely repeal of certain Acts, abolishing the death penalty and a motion for MPs to declare their assets.

On Nov 2, Finance Minister Lim Guan Eng will unveil Budget 2019, and this will be followed by the debates.

"There has been a lot of talk about the coming Budget in recent weeks, and many are concerned. 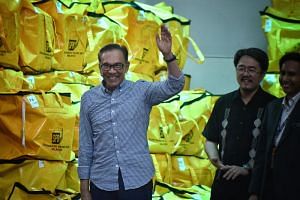 "This is because of the recent statement by the Prime Minister calling for Malaysians to brace for new taxes and make sacrifices," he said.

Datuk Seri Wee, a former transport minister now in charge of the Transport portfolio in the Shadow Cabinet, will propose a motion urging the government not to impose taxes which would burden the people and affect investor confidence.

Veteran lawmaker Annuar Musa said while Budget 2019 would be hotly debated, the opposition would not resort to "government bashing" for the sake of criticising.

"If there are proposals that are good for the nation, then the opposition must be prepared to accept them," he said.

He noted that the Shadow Cabinet was also expected to propose its alternative budget.

Education Minister Maszlee Malik said that, as this was the first Pakatan budget, the government must show prudent management.

"But I hope the budget allocation would further strengthen the education sector," he added.

The last two days will be reserved for Bills and other governmental affairs.

MPs with ministerial portfolios will also be gunning for allocations for their respective ministries.

"We hope for more exports and for an improved allocation to ensure more trade for the country," he said.