JAKARTA - The who's who of Indonesian politics and business gathered in Solo, the hometown of President Joko Widodo in Central Java on Wednesday (Nov 8), to celebrate the nuptials of his only daughter Kahiyang Ayu, and property firm director Bobby Nasution.

The First Family were all dressed in traditional Javanese formal wear - beskap for Mr Joko, and his sons Gibran Rakabuming Raka, 29, and Kaesang Pangarep, 22; and kebaya for First Lady Iriana - as they welcomed guests at the Graha Saba Buana grand hall in Solo.

The groom arrived at the wedding in a horse-drawn carriage, which was also surrounded by presidential bodyguards in black suits, red ties and sunglasses.

Ms Kahiyang and Mr Bobby, both 26, were officially married in an Islamic solemnisation ceremony, or akad nikah, earlier in the morning, with Vice-President Jusuf Kalla acting as witness for the bride, while Coordinating Economic Minister Darmin Nasution, was witness for the groom. 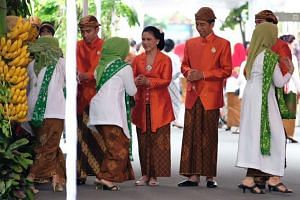 "Thank you to sirs, madams, relatives and friends, for your prayers and blessings for the wedding of Kahiyang Ayu and Muhammad Bobby Afif Nasution, may Allah be pleased with our prayers," said Mr Joko after the ceremony.

His predecessor, Dr Yudhoyono, who was at the wedding with his son Agus, praised the way local traditions were celebrated during the marriage ceremony. 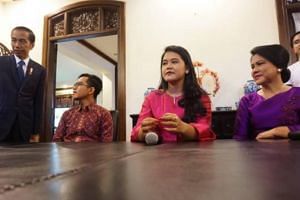 "This is a way to cherish and respect our culture," he told reporters. "Congratulations to the bride and groom, may they be together for long and be blessed, and congratulations to Pak Jokowi and Ibu Iriana."

In addition to the over 7,000 official guests, thousands of other people from Solo, as well as many who travelled from places such as the capital Jakarta and Bandung, in West Java, were at Graha Saba Buana, hoping to join the celebrations.

Security was tight with about 5,500 police officers and soldiers deployed around the city, where separate celebrations and other traditional ceremonies leading up to Wednesday's main event, had been held since the weekend.

The couple first met in 2015 when they were in graduate school at the Bogor Agricultural University in Bogor, West Java. They are said to have dated for about a year.

Ms Kahiyang is the President's middle child while Mr Bobby, a Batak, is the son of the late Erwin Nasution, a former director of state-owned plantation firm Perkebunan Nusantara IV, who died in January.

The Bataks are an ethnic group predominantly from North Sumatra, where the couple will travel to for receptions in Mr Bobby's hometown in the provincial capital Medan, in the last week of November.