PETALING JAYA (THE STAR/ASIA NEWS NETWORK) - Malaysia's Prime Minister Mahathir Mohamad said he was "also shocked" by the acquittal of Finance Minister Lim Guan Eng and businesswoman Phang Li Koon over corruption charges linked to a land deal and a bungalow sale, but that he had to "accept" the decision made by the Penang High Court.

Tun Mahathir was commenting on a statement by the Malaysian Anti-Corruption Commission (MACC)  that it was “shocked” over the court decision on Monday (Sept 3) to acquit Mr Lim and Ms Phang.

He added: "If the court makes a decision which to me is wrong, I also never comment on it. This decision is made by the court so we have to accept it."

In the closely watched case, Mr Lim was acquitted of corruption charges after the Attorney-General's chambers withdrew its case against him.

According to news site Malaysiakini.com, the Penang High Court discharged Mr Lim of two charges - that he used his former position as Chief Minister of Penang to approve the conversion of land, and that he gained gratification for himself by buying a bungalow below market value from Ms Phang.

Mr Lim had pleaded not guilty to the charges in 2016, when he was a member of the then-opposition Pakatan Harapan (PH) pact. He is secretary-general of the Democratic Action Party, one of the four parties that make up Malaysia's ruling alliance PH.

The acquittal comes after Mr Lim's lawyers argued that the charges against him were politically motivated, and filed representations to the Attorney-General's Chambers for the cases to be dropped after PH was elected to power in May.

Ms Phang, from whom Mr Lim had bought the bungalow in 2015, was also acquitted of the corruption charge against her.

The prosecution had initially asked for a discharge not amounting to an acquittal, reported Malaysiakini, but the judge ordered a full acquittal instead.

The MACC had said in a statement on the acquittal: “The MACC is shocked by the decision by the Penang High Court in acquitting the former chief minister of the charges of corruption in relation to the sale of a bungalow lot and the charge of conspiring with businesswoman Phang, after the prosecution retracted the case.

“The MACC would like to stress that the decision was made by the Attorney General’s office and not the MACC,” the anti-graft agency said in a statement Monday, as quoted by The Star.

Earlier, an anti-graft watchdog said the court's decision raises questions of whether government institutions are truly independent of partisan interests in Malaysia.

Centre to Combat Corruption and Cronyism (C4) executive director Cynthia Gabriel expressed shock over the Penang High Court's decision on Monday (Sept 3), and said that this move underscores the need for public clarification and disciplinary sanctions to take place over the alleged corruption charges.

"C4, as an organisation championing anti-corruption and accountable governance, is concerned that our venerable institutions are subject to political interference and/or partisan motivations when it comes to corruption.

"We are concerned that politicians who have actually betrayed public trust may be allowed back into the system, while others may have to suffer from trumped-up charges in the interest of defending political supremacy rather than public interest," she said in a statement.

She questioned how the High Court could easily acquit the duo from corruption charges, as former attorney-general Apandi Ali was confident in leading the prosecution previously.

"Either the previous AG was coerced to press charges in court, or the system is always stacked in favour of the existing government," she added.

According to Ms Gabriel, C4 had stressed in the past that Mr Lim needs to be cleared of corruption charges before assuming his Finance Minister position, in the name of good governance. Mr Lim was sworn in as Finance Minister on May 21. He was formerly the Penang chief minister. 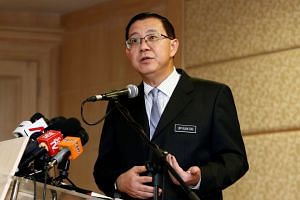 "The ease of which he was acquitted, even when the prosecution asked for a discharge not amounting to an acquittal, raises highly suspicious flags," she said.

Ms Gabriel said the Attorney-General's Chambers (AGC) and the MACC need to provide a transparent explanation to the public over the controversy surrounding the duo's acquittal from corruption charges.

"If they're expressing shock, then they are pushing the responsibility to the AGC. If they believed there was a case, MACC must explain to the public of the initial reasons for recommending charges to be pressed in the first place.

"We may also need to consider disciplinary sanctions over this imbroglio."

She said the public needs an assurance that the originating evidence and motivations in MACC's investigations are valid.

Meanwhile, Mr Lim's counsel Ramkarpal Singh said he was surprised by the MACC reaction as the agency's representative was in court to withdraw the charges against Mr Lim.

“It is ridiculous for the MACC to claim ignorance of today’s development," Mr Ramkarpal said, according to the Free Malaysia Today news site. “The director of its own legal and prosecution division, Mohd Masri Daud, (had) informed the court that he was withdrawing the charges.

“I was in court this morning with other counsel for both accused and there was not a hint of dissatisfaction from Masri or his team reflecting MACC’s said claim,” said Mr Ramkarpal.