BANGKOK • In Thailand's election "war room", the authorities scroll through thousands of online posts, looking for violations of laws restricting political parties' campaigning on social media that activists say are among the world's most prohibitive.

The monitors are on the alert for posts that "spread lies, slander candidates, or use rude language", all violations of the new electoral law, said Mr Sawang Boonmee, deputy secretary-general of the Election Commission (EC), who gave a Reuters team an exclusive tour of the facility.

When they find an offending post on, for example, Facebook, they print it out, date-stamp it, and file it in a clear folder, to be handed over to the EC and submitted to Facebook for removal.

"When we order content to be removed, we'll reach out to the platforms, and they are happy to cooperate with us and make these orders efficient," he said.

Mr Sawang also said the tough electoral laws governing social media for the March 24 polls, the first since a 2014 military coup, are a necessary innovation aimed at preventing manipulation that has plagued other countries' elections in recent years.

"Other countries don't do this. Thailand is ahead of the curve with regulating social media to ensure orderly campaigning and to protect candidates."

A Facebook representative said it reviews requests from governments on a case-by-case basis. "We have a government request process, which is no different in Thailand than the rest of the world." 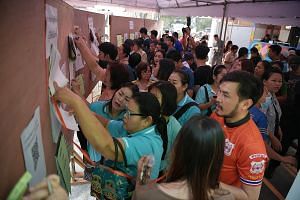 Thailand votes: Grand old party could be kingmaker in ballot

Democracy advocates worry the social media curbs may be impeding parties from freely campaigning. The rules require that candidates and parties register social media handles and submit a post to the commission, stating what platform it will appear on and for how long.

Parties and candidates are only allowed to discuss policies, and posts that are judged to be misleading voters or that portray others negatively could see the party disqualified, or a candidate jailed for up to 10 years and banned from politics for 20.

Mr Pongsak Chan-on, coordinator of the Bangkok-based Asia Network for Free and Fair Election, said the rules go far beyond combating "fake news" and raise questions about how free and fair the election will be.

"The rules are stricter than in any recent elections anywhere. They're so detailed and strict that parties are obstructed," he told Reuters.

The monitoring centre, with a signboard reading "E-War Room", has three rows of computers and stacks of printouts, with half a dozen workers spending eight hours a day searching for violations of the law.

Mr Sawang said another intelligence centre scanned for violations 24 hours a day but it was "off-limits" to media.

The election is broadly seen as a race between the military-backed Prime Minister Prayut Chan-o-cha and parties that want the military out of politics.

But the stringent rules have left anti-junta parties fretting about how to campaign online, nervous that they could inadvertently break a rule that triggers disqualification.

So far, the new rules have not been used to disqualify any candidates though the very threat has had a dampening effect and encouraged self-censorship.

"They create complications for parties," said Ms Pannika Wanich, spokesman for the new Future Forward Party, which has attracted support among young urban folk who have come of age on social media.

About 74 per cent of Thailand's population of 69 million are active social media users, putting Thais among the world's top 10 users, according to a 2018 survey by Hootsuite and We Are Social.