Hundreds of thousands of voters across Thailand flocked to schools and temples yesterday to cast early ballots, a week ahead of the country's first general election since a military coup in 2014.

They will have a single ballot to cast for their preferred constituency candidate. The ballot will also count as a vote for the candidate's party in a separate list of seats up for grabs.

Altogether, 80 parties are contesting 500 seats in the legislature, of which 350 are constituency seats, and 150 are party-list seats.

Around 2.6 million of more than 51 million eligible voters have registered to vote outside their home constituencies. They include more than 928,000 who will cast their votes at 58 polling stations in the capital Bangkok.

In Bangkok's Bangkapi district, which recorded the highest number of registered early voters at 61,401, queues started to form as early as 6am, two hours before voting opened.

First-time voter Naree Wangwan, 24, was the first in line at Banbangkapi High School, which has been turned into a polling station.

"I was so excited I woke up at 4am to take the bus and avoid the traffic jam," the trainee teacher told The Straits Times. "I am here because I want to do my part to make a change in the country. I want a better economy, public transportation and education. There is still much inequality," she added. 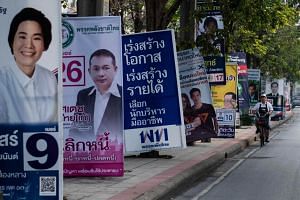 Like Ms Naree, many voters had woken up in the small hours of the morning so that they could get to the polling stations early.

Many had also ditched their cars and motorcycles for buses and the Bangkok Mass Transit System to avoid massive traffic jams and parking problems.

Some came armed with umbrellas and handheld portable fans to beat the scorching heat, while others had their pet dogs in carriers and pushed their babies in strollers.

Mr Suthep Srisamut, who works in a creative entertainment company, said he had woken up at 5am.

"That is so early... but (the election) is important for everybody," said the 23-year-old.

Mechanic Plern Somphet, who is from the north-eastern province of Buriram, said he had high hopes for the future.

"I have been waiting for the election for so long, I really want to vote," the 47-year-old said. "I want the government to improve the economy and (ensure) there are no more fights in our country."

The former prime minister, who served as regent after the death of King Bhumibol Adulyadej in 2016, arrived in a wheelchair at the polling station at Sukhothai School in Sukhothai Road. It was his first public appearance after a recent hospitalisation, The Nation newspaper reported.

With an oxygen tube in his nostrils, he waved and smiled to reporters but made no remarks, the report said. He was able to stand long enough to drop his ballot into the box.

As part of voting regulations, political parties were not allowed to campaign close to the polling stations.

Registered early voters who failed to turn up yesterday will not be eligible to vote next Sunday.