JAKARTA (BLOOMBERG) - Separatist protests in the resource-rich region of Papua are undermining Indonesian President Joko Widodo's efforts to quell a five-decade-old civil unrest with an unprecedented outreach and billions of dollars of investment.

Thousands of protesters took to the streets in Papua and West Papua for a second week, setting buildings on fire on Thursday (Aug 29) and clashing with security personnel a day earlier, leaving two civilians and a military officer dead.

The protests come as the President, known as Jokowi, spent billions of dollars on new infrastructure in an effort to cultivate warmer relations with secessionist factions that have long pursued independence from Indonesia.

The region is home to Grasberg copper and gold mine, operated by Freeport-McMoRan Inc and the Tangguh LNG project run by BP Plc.

Mr Joko called for calm and restraint late on Thursday and urged protesters to not damage public property. He also ordered military and police to take stern action against those violating laws and "perpetrators of anarchist and racist acts".

The government will continue to focus on infrastructure and human resources development in Papua and will meet with leaders from the region soon, Mr Joko said in a message posted by his office on YouTube.

It's not clear if the President's message will deter the demonstrators.

"If they were talking about anti-racism last week, they have now united in all areas to demand an independence referendum," said Ms Veronica Koman, a Jakarta-based human rights lawyer who focuses on Papua. "This is an accumulation of all discrimination carried out by the government of Indonesia."

Located in the western half of the island of New Guinea, Papua became part of Indonesia following a controversial UN-backed referendum in 1969. Decades of conflict between separatists and the government ensued, with the latter standing accused of repeated human rights abuses, rampant deforestation and the exploitation of natural resources.

Those tensions came to a head once again on Aug 17 with the detention and racial abuse of 43 Papuan students in Surabaya for alleged desecration of Indonesia's national flag during the country's independence day, which sparked riots in Papua.

Around 1,000 pro-independence supporters wielding arrows, machetes and stones clashed with military in Deiyai regency on Wednesday, according to the military.

Mr Markus Haluk, a leader of the pro-independence separatist group United Liberation Movement for West Papua, said his group would continue to coordinate protests while seeking international support for Papua's "right of self-determination".

Prior to the protests, Mr Joko had sought to make inroads with separatist factions, sinking US$1.39 billion (S$1.93 billion) into a trans-Papua highway project and earmarking a piece of his US$412 billion dollar national infrastructure push for new roads and airports into the poverty-stricken region.

"The problem with Jokowi's approach is that it has been one-dimensional. He's operated on the principle that if you end isolation and speed up development, the conflict will go away," said Ms Sidney Jones, director of the Institute for Policy Analysis of Conflict in Jakarta. "He hasn't shown any understanding of the complexity of the underlying political issues." 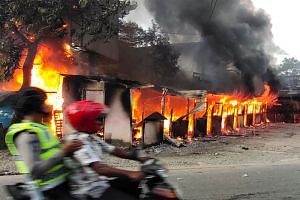 Last year, Mr Joko announced Indonesia had spent US$3.85 billion to wrest control of Grasberg. The mine, previously majority-owned by Phoenix-based Freeport, has long been the target of separatist attacks over accusations Indonesia had stripped provinces of their natural wealth. Analysts say if Mr Joko wants to make genuine progress in Papua, he should do a lot more to level the playing field.

"The Papua solution needs more than shiny bridges, dancing with the locals and boots on the ground," said Mr Achmad Sukarsono, a senior analyst at Control Risks. "It needs a genuine show of commitment to acknowledge and rectify the mistakes the Indonesian state and military have done against the Papuans since the 1960s."

Rights groups said Mr Joko has failed to follow through pledges to settle ongoing human rights abuses and open the borders to foreign journalists long blocked from reporting there.

"He is trying but not delivering," said Mr Andreas Harsono, a researcher at Human Rights Watch, adding that Mr Joko had yet to deliver justice for the slaying of four unarmed Papuan teenagers in Nduga district in December 2014.

"Jokowi promised to find the perpetrators but until now no one has been brought to justice and a lot of people remember that," Mr Harsono said.