KOTA TINGGI (THE STAR/ASIA NEWS NETWORK) - A huge mothership sits in international waters while dozens of smaller boats crewed by Vietnamese fishermen, some armed with guns, encroach on Malaysian territory in search of a prized catch - sea cucumbers, which are abundant in the waters off eastern Johor.

Roaming nearly 1,400km from home and at sea for up to two months, including the time spent fishing off the coastal region of Sedili in Kota Tinggi, the fishermen are guided by state-of-the-art navigation systems.

When their holds are full, they return to the waiting mothership to fill its freezers and cold rooms with sea cucumbers and fish.

At the end of their "tour" the whole fleet returns to Vietnam with tonnes of delicacies that are worth millions, especially in China. 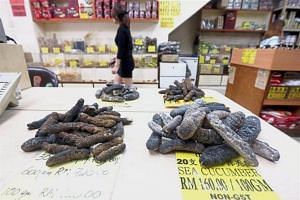 The growing issue of encroachment is causing serious problems for local fishermen, who are intimidated by their bigger vessels and weapons.

The raiders also use the large trawler nets, also known as pukat harimau, which cause massive environmental destruction as they scrape along the seabed and damage corals.

The local market for fish has been affected, with prices rising by more than 50 per cent on average since last year.

Malaysian Maritime Enforcement Agency (MMEA) southern region director First Admiral Adon Shalan said these boats were now a problem as their skippers knew the loopholes to stay out of trouble.

"Every time they see our patrol boats, they immediately head to international waters to avoid being caught," he said.

However, he added, MMEA had some success in detaining Vietnamese fishing vessels and their crew in the past few months.

MMEA had also stepped up its operations against encroaching foreign fishing vessels but Adm Adon believed that the syndicate to which they belonged had local informers spying for them.

"Each time we managed to locate the vessels and deployed assets to catch them, they would immediately leave for international waters," he said.

"We do not have the jurisdiction to catch them as they are in international waters. And even when we do catch them, their syndicate has pockets deep enough to appoint lawyers for them," he said, adding that the fishermen were also able to pay the fines imposed.

He added that MMEA had gathered information that some of these crews had parang and firearms on board.

"We hope the new Abu Bakar Maritime Base at Middle Rock will help us monitor and act against illegal activities in Johor waters," he said.

A source said MMEA has advised the fishing community on the eastern side of Johor not to engage the Vietnamese vessels in any way for their own safety.

On May 23, the Johor Fisheries Department detained 22 Vietnamese fishermen, aged between 19 and 45, and seized RM5mil worth of sea cucumbers from three boats.

The source said serious government action is needed because fines alone did not deter the offenders.

"We need to seize their boats and jail them for committing economic sabotage," the source said.