Long lines of officials, police, relatives and monks in golden robes streamed through the National Funeral House in central Hanoi, where a flag-draped coffin lay beneath a large portrait of the leader, who died at age 61 last Friday.

Mr Quang, a member of the ruling Communist Party's powerful politburo, spent more than four decades climbing the ranks of the security apparatus until he became president in 2016.

The presidency is a mostly ceremonial role and his death is unlikely to dramatically disrupt politics in the one-party state, to which the lifelong communist stalwart and former police chief dedicated most of his career.

Mr Quang was praised for his loyalty and patriotism at his funeral yesterday. His family greeted mourners passing the coffin.

"He devoted his entire life and made numerous contributions to national revolutionary causes... His passing is a huge loss to our party, state and people," said Deputy Prime Minister Truong Hoa Binh. 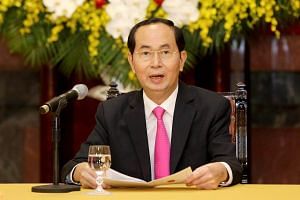 Several foreign officials also paid their respects, including Cambodian Prime Minister Hun Sen, who had known Mr Quang since they fought together in the bush as the Vietnamese led the drive to topple the Khmer Rouge.

Mr Quang's tearful deputy, Ms Dang Thi Ngoc Thinh - now Acting President, the first woman in the job - offered an emotional farewell. "It's hard to believe that you will be gone for real and forever," she wrote in the condolence book.

Officials said Mr Quang died of a "rare virus" and had sought treatment for more than a year in Japan. He had appeared thin and wan in recent weeks, though he continued to work right to the end of his life, hosting a public event two days before his death.

"I don't understand why he had been working until almost the very last day... If he was an ordinary person, he would have a chance to rest and enjoy his last minutes," said a local, who gave his name as Nga.

Mr Quang will be buried in his home town in Ninh Binh province today.