It is latest to join in fray over fishing in disputed waters; seizure comes as Japanese sub, destroyers visit Philippines

Vietnam became the latest country to get embroiled in a potential stand-off with China over fishing in its waters when it seized a Chinese ship with three people on board in the Gulf of Tonkin near the South China Sea.

This came as a Japanese submarine, escorted by two guided-missile destroyers, arrived in the Philippines yesterday ahead of annual military exercises between the Philippines and the United States meant to be a show of strength amid China's increasing assertiveness in the South China Sea.

The 70-man Oyashio is the first Japanese submarine to visit the Philippines in 15 years. One of the Japanese Maritime Self-Defence Force's newest and largest submarines, it docked at Subic Bay, a former US military base 130km north of Manila. It was escorted by the Murasame-class Ariake and Asagiri-class Setogiri destroyers.

The three warships will be on a three-day anti-submarine "training exercise" off Subic Bay, according to Captain Hiroaki Yoshino, head of Training Submarine Division 1.

"We brought a submarine so we can conduct a more realistic exercise at sea," Capt Yoshino said as he stressed that it was just an exercise to train its new officers. 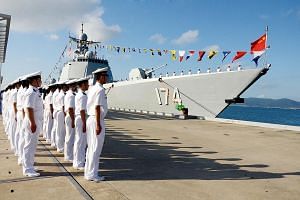 Hainan is the 'tip of the naval spear' 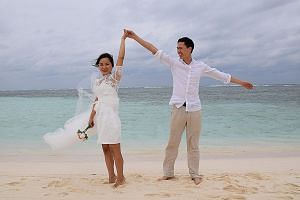 "We don't have any messages to any countries," he added.

Asked if the Japanese expect the Chinese navy to shadow them the way it does US warships passing through the South China Sea, Lieutenant Yoshinori Kobayashi told reporters during a tour of the Ariake: "Theoretically, yes."

He stressed, however, that the Ariake and Setogeri will be on a "training" and not a "freedom of navigation" run.

The Japanese warships' visit comes as the US is planning to conduct a third "freedom of navigation" passage near disputed islands in the South China Sea this month.

Experts predict the next US challenge to the various claims in the South China Sea could occur near Mischief Reef, a feature claimed by the Philippines.

The reef used to be submerged at high tide before China began a dredging project to turn it into an island in 2014.

Today, thousands of US and Filipino soldiers will kick off the 12-day Balikatan (shoulder-to-shoulder) exercises to show how the Philippines, though severely outgunned, can counter China with the help of its longest-standing ally.

This year's drills will, for the first time, involve two supersonic fighter jets that the Philippines acquired recently from South Korea, and US mobile surface-to-air missiles.

Japan is in talks with the Philippines about participating in joint drills with the US on a regular basis, Ms Amy Searight, Deputy Assistant Secretary of Defence for South and South-east Asia, said earlier.

Tensions in the South China Sea, claimed in part by the Philippines, Vietnam, Brunei, Malaysia and Taiwan, have also flared up over illegal fishing recently.

The Chinese vessel seized by Vietnam was carrying 100,000 litres of diesel oil that its captain said was for Chinese fishing boats operating in the area, The Wall Street Journal quoted the An Ninh Thu Do newspaper as saying yesterday.

The seizure is seen as a rare move by Vietnam, which has accused Chinese fishing vessels of intruding into its waters in the past but stopped short of making arrests.

In recent weeks, Chinese vessels, often said to be accompanied by China's coast guard vessels, have got into hot water with the Malaysian and Indonesian maritime authorities for allegedly fishing in waters claimed by the countries.