A source familiar with the matter said Kim will travel to Vietnam for an official state visit after the Feb 4-8 lunar new year. A separate source confirmed Kim's visit but did not give any dates.

The United States and North Korea are holding high-level talks in Washington this week to discuss a second meeting between Trump and Kim to seek an "interim" deal to revitalise nuclear talks, US and South Korean media have said.

Communist-ruled Vietnam, which has good relations with both the United States and North Korea, has been widely touted as the most likely venue for a second meeting.

The South-east Asian country is keen to host the summit as a demonstration of its normalised ties with the United States, its foe during the Vietnam War, a Vietnamese government official and two diplomatic sources told Reuters.

The Vietnamese source did not confirm if a state visit by Kim would be combined with a US-North Korean summit.

Media is heavily censored in Vietnam and the ruling Communist Party retains a tight control on information. The officials who spoke to Reuters did so on the strict condition of anonymity, citing the sensitivity of the situation. 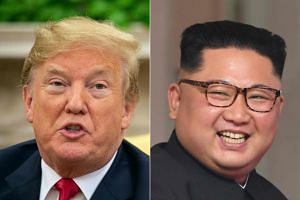 Vietnam's Foreign Ministry did not respond to a request from Reuters for comment.

A US embassy spokesman in Hanoi said the embassy did not have anything to announce regarding the summit location, and referred questions to the White House.

Trump told reporters in Washington on Jan 6 that the United States and North Korea are "negotiating a location" for a second summit, and that "it will be announced probably in the not too distant future".

Kim and Trump met for a historic summit in Singapore in June, but have since struggled to make progress towards denuclearisation of the Korean peninsula.

Top North Korean officials, including former spy chief Kim Yong Chol, were seen at Beijing airport on Thursday, and are believed to be headed to the United States for meetings with Secretary of State Mike Pompeo and possibly Trump.

Asked about a possible high-level meeting this week, a State Department spokesman said: "We have no meetings to announce."

A1 VISIT IN DANANG

Both Hanoi and the central Vietnam city of Danang have been viewed by analysts as possible locations for a second summit.

A senior Danang-based official said the city had not been asked to host such an event, but had received instructions to prepare for a possible "A1" visit, referring to a high-profile foreign leader.

A senior South Korean official earlier told Reuters that the United States has "various options" on the location, which would be decided after consultations with North Korea, while another official said that Vietnam is only one of the countries keen to host the summit.

Vietnam, which rose from the ashes of a victorious but costly war with the United States and transformed itself into one of Asia's fastest-growing economies, has developed close strategic ties with Washington.

In 2016, Washington ended a decades-old arms embargo on Vietnam, and last year a US aircraft carrier visited Vietnam for the first time since the end of the Vietnam War.

Vietnam's exports to the United States, its largest export market, rose 14.3 per cent last year to US$47.53 billion (S$64.4 billion), accounting for nearly 20 per cent of Vietnam's total exports.

North Korea can learn from Vietnam's experience in building ties with the United States, said Le Dang Doanh, a Vietnamese economist and former government adviser who has given lectures to North Korean delegations visiting Vietnam.

"They asked a lot about how Vietnam can normalise relations with the United States after losing so many Vietnamese lives during the war," Doanh said. "I told them we never forget the past, but we also look to the future."