"We are ready to grab the opportunity," Mr Phuc said in an interview with Bloomberg TV's Haslinda Amin, a few days before departing this week to the World Economic Forum in Davos, Switzerland.

Vietnam is quietly positioning itself as a safe haven for manufacturers wary of getting caught in the crossfire of the tariff war between the US and China. With a raft of free trade agreements, relatively cheap labour and close proximity to China, Mr Phuc has a good story to tell global executives he'll meet in Davos.

"We are trying to increase exports in both quantity and quality of our products, especially in which we have advantages, such as seafood, commodities, footwear and electronics," Mr Phuc said.

"We aim to become an export economy that can grow fast and provide more jobs with higher income for our people."

Nonetheless, the South-east Asian nation has yet to see a flood of companies moving in from China, he said. And the economy has some serious challenges to overcome: inadequate infrastructure and lack of skilled workers make it difficult to attract manufacturing beyond assembly-line work such as garment stitching.

Global economic conditions are also worsening. The US-China trade war and more subdued world growth is weighing on export demand, a threat to an economy like Vietnam, where trade accounts for about twice the nation's gross domestic product - more than any country in Asia apart from Singapore. About a quarter of Vietnam's total trade is with China.

Vietnam's economy seems to be sheltered for now. Growth quickened to 7.1 per cent in 2018, among the fastest in the world. Mr Phuc said he is confident growth will reach the higher end of the government's forecast range of 6.6 per cent to 6.8 per cent this year. He also vowed to keep the Vietnamese dong stable in 2019.

"We see growth momentum in different areas and have good foundations to achieve our goals," he said.

Vietnam, which has completed about 16 free-trade agreements, began tethering itself to global trade after introducing market-oriented "doi moi" reforms in the 1980s. Exports surged to a record US$244 billion (S$332 billion) last year, with US customers accounting for about US$48 billion of that - more than double compared with five years ago. 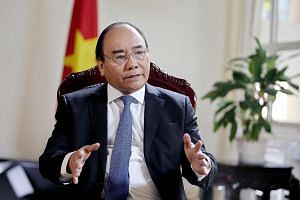 How trade war will hit SE Asia: Vietnam the only regional producer most likely to benefit

Several large manufacturers already operate in Vietnam, the biggest of which is Samsung Electronics, which accounted for about a fifth of the country's exports last year.

Mr Phuc, concerned about anti-trade sentiments from the Trump administration, is vowing that the country will step up imports from the US, from Boeing aircraft to products from oil companies.

Vietnam faces a possible US$3 billion trade deficit in 2019 amid growing global protectionism, VnExpress news website reported on Sunday, citing Deputy Minister of Industry and Trade Hoang Quoc Vuong. Volatile trade policies in the US and European Union could hurt Vietnam's exports this year, Mr Vuong was cited as saying.

The South-east Asian country ended 2018 with a US$6.8 billion trade surplus, according to the General Department of Vietnam Customs.

Other factors that could contribute to a trade deficit include any decline in Vietnam's agricultural exports as other countries ratchet up domestic production to reduce external reliance, and as its growing manufacturing sector imports more materials and machinery, VnExpress reported.

"The challenges this year will include global trade tensions, climate change and insufficient infrastructure," he said.

As a developing economy, he added, "we have to keep growing to bring more jobs to our people and eliminate poverty. We have to grow at more than 6 per cent annually to boost per capita income and to escape the middle income trap."

Still, Mr Phuc has a good story to sell to global investors. Vietnam was ranked No. 1 among seven emerging Asian countries as manufacturing destinations by Natixis SA, which looked at demographics, wages and electricity costs, rankings in doing business and logistics, and manufacturing as a share of total foreign direct investment.

"The government has been doing a lot to help foreign investors to grow businesses long-term in Vietnam," Mr Phuc said.