UNITED NATIONS (REUTERS) - The United States on Tuesday (Feb 13) described Myanmar denials of ethnic cleansing of Rohingya Muslims as "preposterous" as it called on the UN Security Council to hold the military accountable and pressure leader Aung San Suu Kyi "to acknowledge these horrific acts that are taking place in her country."

"Powerful forces in the Burmese government have denied the ethnic cleansing in Rakhine State," US Ambassador to the United Nations Nikki Haley told the Security Council.

"To make sure no one contradicts their preposterous denials, they are preventing access to Rakhine to anyone or any organisation that might bear witness to their atrocities, including the UN Security Council," Haley said.

Haley also called for the release of Reuters news agency reporters arrested for reporting on the massacre of Rohingya Muslims.

"We strongly call for their immediate and unconditional release," she said.

In a reference to Myanmar's reason for detaining the journalists, Haley added, "On top of it all, they have the gall to blame the media."

The Reuters special report, published last week, lays out events leading up to the killing of 10 Rohingya men from Inn Din village in Rakhine state who were buried in a mass grave after being hacked to death or shot by Buddhist neighbors and soldiers. 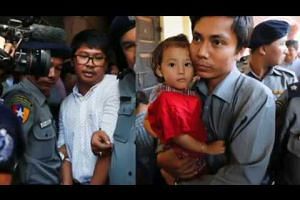 French UN Ambassador Francois Delattre also told the Security council that a massacre of Rohingya Muslims reported by Reuters could "constitute crimes against humanity." Myanmar has denied that ethnic cleansing has taken place.

Any push for UN Security Council action is likely to face resistance from council veto powers Russia and China, who both said on Tuesday the situation in Rakhine state was stable and under control.

"Using labels and attempts to use contradictory and subjective reports of the media... to find out who's guilty and condemn them only move us farther away from a solution,"Russia's Deputy UN Ambassador Dmitry Polyanskiy warned.

Nearly 690,000 Rohingya have fled Rakhine state and crossed into southern Bangladesh since last August, when attacks on security posts by insurgents triggered a military crackdown that the United Nations has said may amount to genocide.

"Conditions are not yet conducive to the voluntary repatriation of Rohingya refugees," UN refugee chief Filippo Grandi told the Security Council.

While Myanmar UN Ambassador Hau Do Suan said that some diplomats had been able to travel to Rakhine state but also told the UN Security Council not to visit during February because it was "not the right time," Kuwait's UN Ambassador Mansour Ayyad Al-Otaibi said this month.

Myanmar's Hau Do Suan said that an inquiry by the Myanmar military, known as the Tatmadaw, had found that 10 Arakan Rohingya Salvation Army militants had been arrested in Inn Din and executed and buried a day later. 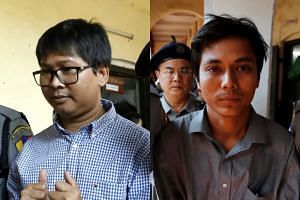 "Actions are being taken against 16 individuals, including army and police officers and some villagers who had acted in violation of standard operating procedures and the rules of engagement. This action of the Tatmadaw is positive step forward in taking responsibility and deserves encouragement," he said.

With reference to Reuters journalists arrested for reporting on the Rohingya, Hau Do Suan said Myanmar recognises freedom of the press and the journalists were not arrested in December for reporting a story, but were accused of "illegally possessing confidential government documents."

"Every citizen is bound by the existing law of the land. It is important that the actions of the journalists must also within the bound of the law," he said.

Britain, France, the United States, the Netherlands and Kazakhstan all called for the release of the Reuters journalists during the Security Council meeting on Tuesday.