KUALA LUMPUR (AFP) - US Secretary of State Mike Pompeo arrived in Malaysia Thursday (Aug 2), the first stop on a South-east Asian tour expected to focus on North Korea's commitment to denuclearisation and simmering maritime and trade tensions with Beijing.

Pompeo will push for sustained pressure on Pyongyang to destroy its nuclear arsenal, urging the region's leaders to enforce UN sanctions on the hermit state, State Department officials have said.

The trip is also an opportunity for him to promote the United States' strategic vision for Asia at a time of friction with China over its moves to assert sovereignty in the disputed South China Sea.

In Malaysia, Pompeo is set to hold talks with Mahathir Mohamad, 93, who was returned to power in May when the opposition won a historic election victory.

Mahathir's triumph - the first time the opposition had defeated the long-ruling government - "says a lot for governance and democracy" in Malaysia, a senior State Department official said as Pompeo arrived in Kuala Lumpur.

"It's a strong democratic member of Asean (the Association of South-east Asian Nations)," the official added.

Pompeo will then travel to Singapore to attend an annual forum Saturday that brings together top diplomats from 26 countries and the European Union for talks on political and security issues in the Asia-Pacific. 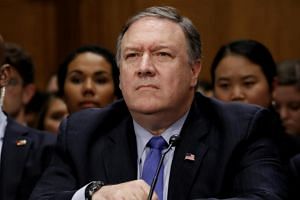 US to assure Asean of engagement and pressure on North Korea

His North Korean counterpart will also be at the gathering in the city-state, where US President Donald Trump and the North's leader Kim Jong Un held their historic summit on June 12.

No meeting has been announced between Pompeo and Ri Yong Ho, but US officials have not ruled out the possibility of a discussion of commitments by Trump and Kim to the "denuclearisation of the Korean Peninsula".

Pompeo is charged with nailing down the details of the Singapore agreement, including how and when the North's nuclear programme is to be dismantled.

But lack of progress has been a source of concern for many observers, as international sanctions begin to ease and news reports indicate that North Korea is continuing its nuclear and ballistic programmes.

Represented at the Asean meeting will be Russia and China, who two weeks ago put a six-month hold on a US request to the United Nations sanctions committee to halt all deliveries of refined oil products to North Korea.

Escalating trade tensions between the US and China, the world's top two economies, will also be on the agenda after Washington warned it is considering hiking levies on US$200 billion (S$273 billion) of Chinese goods, having already targeted imports worth US$34 billion last month.

In addition, the US secretary of state will focus on another major regional flashpoint at the forum - rival claims in the South China Sea and China's growing presence there.

China claims nearly all of the sea - including waters approaching the coasts of Asean members Vietnam, the Philippines, Malaysia and Brunei - and has in recent years expanded its presence there by building artificial islands capable of holding military bases.

Pompeo's last stop will be in Jakarta, where he will seek to reinforce relations with a key US ally.