Malaysian Attorney-General Tommy Thomas announced yesterday that US$57 million (S$78 million) has been banked into an asset recovery account the government set up for 1MDB.

US prosecutors had accused Mr Riza of using funds embezzled from 1MDB to finance Red Granite's films, including The Wolf Of Wall Street, as well as throw parties and buy gifts for celebrities.

The US$57 million was the total left after the deduction of about US$3 million costs incurred by the US authorities while investigating the company and also in maintaining the superyacht Equanimity, which had been bought by fugitive financier Jho Low allegedly with 1MDB funds, after it was seized by the authorities.

The US Department of Justice (DOJ), under its Kleptocracy Asset Recovery Initiative, has also sold off Low's interest in Park Lane Hotel in Manhattan, New York, for US$139 million.

The US$139 million - less costs incurred by the DOJ and Federal Bureau of Investigation (FBI) in investigating, seizing, litigating and securing settlement for the asset - will be banked in Malaysia. 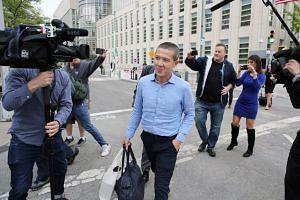 Govt has evidence Jho Low kept a lot of the 1MDB money for himself: Malaysian PM Mahathir

Malaysia aims to retrieve US$7 billion in misappropriated funds from 1MDB: Mahathir

1MDB, Malaysia's beleaguered state-owned fund, had amassed debts of more than RM55 billion (S$18 billion) at its peak, according to the country's declassified Auditor-General's report.

In an intricate web of financial fraud that crossed continents, money raised by 1MDB from loans was allegedly spent on high-end property, luxury goods, lavish holidays and parties involving Najib, his family and associates such as Low.

In his statement yesterday, Mr Thomas said Malaysia has so far recovered US$322 million worth of 1MDB assets since investigations into the state fund effectively began after the 14th general election in May last year.

The Attorney-General added that Singapore had transferred $15 million to Malaysia between last September and March this year. A sum of $50 million traceable to 1MDB was ordered by Singapore courts to be repatriated to Malaysia.

The balance of $35 million will be transferred soon, according to Mr Thomas.

On Monday, Mr Thomas announced that the judicial sale of Equanimity, for US$126 million, had been completed, while saying in a separate announcement that former Goldman Sachs banker Roger Ng has been extradited to the US to be charged for his involvement in 1MDB.

A version of this article appeared in the print edition of The Straits Times on May 08, 2019, with the headline 'US returns $78m of 1MDB funds to Malaysia'. Subscribe
Topics:
More
Whatsapp Linkedin FB Messenger Telegram Reddit WeChat Pinterest Print Purchase Article Copy permalink