The United States has begun joint patrols with the Philippines in the South China Sea, the first taking place last month and the second, early this month, US Defence Secretary Ashton Carter said.

Such joint patrols are somewhat rare and are taking place against a backdrop of growing tension over China's territorial claims and reclamation of rocky outcrops in the South China Sea.

The Philippines and the US kicked off their annual Balikatan military exercises involving some 8,000 troops early last week. 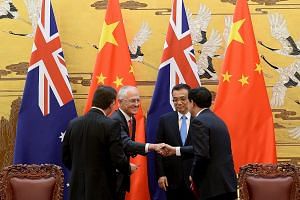 Mr Carter said that, after the exercises end today, five A-10C Thunderbolt ground support aircraft, three HH-60G Pave Hawk helicopters and an MC-130H special operations aircraft, together with about 200 airmen and their crew, would stay behind at Clark Air Base until the end of the month.

"They will continue joint training and conduct flight operations in the area, including the South China Sea, and lay the foundation for joint air patrols to complement ongoing patrols," he said. "We'll do this on a regular basis," he added.

The Pentagon said 75 US troops, mostly Marines, would be posted to the Philippines' main military camp in Manila to form a "command-and-control unit" to support "increased operations in the region".

"We expect the US presence here to deter uncalled-for actions by the Chinese," Philippine Defence Minister Voltaire Gazmin said at the joint news briefing with Mr Carter.

After the US forces and aircraft there leave, others will be rotated through.

Mr Carter said the broader US military presence in the Philippines is not meant to provoke a conflict with China.

"There is no question that there is concern in the region about China's… self-isolating behaviour. That's a real phenomenon but the cause of that is… not America. America's policy continues to be one that's valued on the principles of peaceful resolution of disputes, lawful settlement of things like territorial disputes in the South China Sea or anywhere else," he said.

China lays claim to nearly all of the South China Sea. The Philippines, Vietnam, Malaysia, Brunei and Taiwan also have claims to parts of the waters.

Under a defence deal signed in 2014 with the Philippines, the US is allowed to build and operate facilities at five Philippine military bases. Mr Carter said the US may use other bases in the future.