When an American rescues a puppy from a dog meat farm in Asia, is it a compassionate gesture or is he imposing Western ideals on other cultures?

US Olympic skier Gus Kenworthy has sparked a debate on the issue after he adopted a puppy from a dog meat farm in South Korea, where the Winter Olympic Games are being held.

In an Instagram post last Saturday (Feb 24), the 26-year-old athlete shared a photo of the puppy named Beemo he rescued from the farm, along with shots of the farm and some of the 90 other dogs living there.

In the caption, Kenworthy said the visit to the farm was "heart-wrenching" and added that there are 2.5 million dogs being raised for food across South Korea in "some of the most disturbing conditions imaginable".

According to him, the farm that he visited will be shut down, with animal advocacy group Humane Society International finding homes for the dogs.

Kenworthy said while it can be argued that eating dogs is a part of Korean culture, he does not personally agree with it but realises that "it's not my place to impose Western ideals on the people here".

"The way these animals are being treated, however, is completely inhumane and culture should never be a scapegoat for cruelty," he wrote.

He added that he hopes his visit will help raise awareness on the "inhumanity of the dog meat trade and the plight of dogs everywhere".

In his reply to Kenworthy on Twitter, journalist Joon Lee said most Koreans do not eat dogs and are against the practice, especially young people.

That's why I wanna help! Most young Koreans ARE against it & bc farming dogs is a much smaller industry than other livestock there's an opportunity to make real change! I'm sorry if it seemed like I was judging Korean ppl. I'm not. I just wanna help end the dog abuse! @iamjoonlee https://t.co/xnpG67ntsE 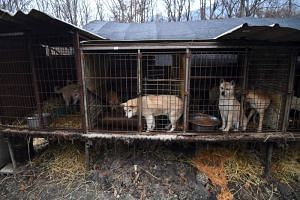 Other netizens also criticised Kenworthy for not trying to "fix something in the US at least". One user tweeted: "Plenty of wrong right here in the USA for him to see..."

But some stood up for the Olympian, saying: "Why do you have to be so negative? He is trying to help and make a difference where he sees something wrong."

This is not the first time that the Olympian has rescued dogs while competing overseas.

In 2014, during the Sochi Winter Olympics, Kenworthy brought a stray dog and her four puppies back to the US with him.

He ended up adopting two of the dogs, Jake and Mishka, who have since become Instagram stars with their own account on the social media platform.