JAKARTA • The US embassy in Jakarta has issued a security alert ahead of election results due on Wednesday, amid arrests by the Indonesian authorities of nearly 30 suspected militants, including some who police say are able to detonate bombs using Wi-Fi networks.

The arrests are part of efforts to tighten security ahead of an announcement by the General Election Commission on Wednesday, when nearly 32,000 police and military personnel will be on standby in Jakarta.

The embassy advised US citizens to avoid areas where large demonstrations may occur in Jakarta, and in other cities including Surabaya in East Java and Medan in North Sumatra, in a statement on Friday.

Indonesian National Police spokesman Muhammad Iqbal told reporters at a Friday briefing that police this month arrested 29 suspects linked to Jemaah Ansharut Daulah (JAD) - the largest group linked to the Islamic State in Iraq and Syria in the country - and confiscated at least five homemade bombs in various locations across Java and North Sulawesi.

Some of the suspects have had paramilitary training and had gone to Syria as foreign fighters, Mr Iqbal said.

Indonesian police also said some of the suspects have learnt how to use Wi-Fi to detonate explosive devices, but it was not clear how advanced their plans were. 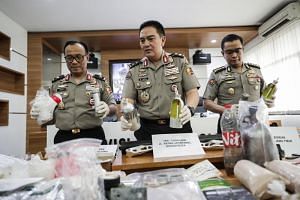 The police on May 8 arrested a suspect identified as EY, a local leader of JAD, in Bekasi, near Jakarta, for plotting attacks during the election results announcement.

JAD does not have an official spokesman, and it is not known if any of the suspects have retained legal representation.

"For this group, democracy is an ideology that they do not agree with," Mr Iqbal said last Friday, adding that the National Police are advising people not to make unnecessary trips on the day the results are announced.

A version of this article appeared in the print edition of The Sunday Times on May 19, 2019, with the headline 'US embassy issues security alert ahead of Indonesia polls results'. Subscribe
Topics:
More
Whatsapp Linkedin FB Messenger Telegram Reddit WeChat Pinterest Print Purchase Article Copy permalink