CLARK FREEPORT ZONE, PHILIPPINES (REUTERS) - US Defence Secretary James Mattis said he would talk with Asian allies about North Korea and the crisis caused by Pyongyang's "reckless" provocations, as he kicked off a week-long trip to the region on Monday (Oct 23) to meet defence chiefs in the Philippines.

His trip to Asia, which will also include stops in Thailand and South Korea, comes just weeks before President Donald Trump's first visit to Asia.

Trump has been locked in a war of words with North Korean leader Kim Jong Un, calling him a "rocket man" on a suicide mission for openly pursuing a nuclear-tipped missile capable of hitting the United States.

Trump, in a speech last month at the United Nations, threatened to destroy North Korea if necessary to defend the United States and its allies. Kim has blasted Trump as "mentally deranged."

Mattis, who has emphasised diplomacy, is expected to meet both his Japanese and South Korean counterparts on Monday before meeting with all three of them together. He will attend a meeting from Monday to Wednesday of defence ministers from the Association of South-east Asian Nations (Asean) in the Philippines. He will go to Seoul later in the week for more defense talks.

"I will talk with my counterparts, discussing the regional security crisis caused by the reckless DPRK North Korea provocations but also discuss our respect for shared values like sovereignty of the states, their territorial integrity, freedom of navigation through historically international waters, and fair and reciprocal trade," Mattis told reporters.

A US Navy destroyer sailed near islands claimed by China in the South China Sea last week, seeking to promote freedom of navigation. The maneuver prompted anger in Beijing. 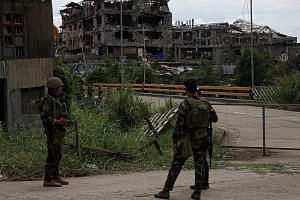 Asean to map out response to likely new ISIS threats

Trump's trip next month will include a visit to China, which he has been pressuring to do more to rein in North Korea's missile and nuclear programs. China is North Korea's neighbor and biggest trading partner.

Mattis, while in the Philippines, said he would commend the military for defeating insurgents in Marawi City on the island of Mindanao.

Some experts see the siege as a prelude to a more ambitious bid by the Islamic State in Iraq and Syria (ISIS) to exploit Mindanao's poverty and use its jungles and mountains as a base to train, recruit and launch attacks in the region.

"It was a tough fight," Mattis said, adding he thought the Philippines had sent "a very necessary message to the terrorists."

On Thursday, Mattis will lead the US delegation in Thailand for the cremation rites for the late King Bhumibol Adulyadej.