In his brief remarks at the start of talks with Mr Joko at the Istana Merdeka presidential palace, Mr Pompeo thanked the President for receiving him, and said the US values its relations with Indonesia.

"I just want to say that Indonesia is a strategic partner of the United States and we appreciate the growth of democracy in this country. Democracy is something that is highly valued in America," he said.

Speaking after Mr Pompeo, Mr Joko said Indonesia is proud that it is not only the largest country in South-east Asia and the largest Muslim country in the world, but also that it remains a growing democracy.

"The challenge faced by all nations now is how do we preserve our diversity (and) have mutual respect," said Mr Joko.

The President was accompanied at the meeting by Foreign Minister Retno Marsudi, Trade Minister Enggartiasto Lukita, State Secretary Pratikno, and Indonesian Ambassador to the US, Mr Budi Bowoleksono, among others.

This was Mr Pompeo's first visit to Indonesia after being appointed as US Secretary of State in April. 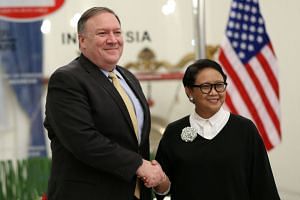 He arrived in Jakarta on Saturday after attending the East Asia Summit ministerial meeting and the Asean Regional Forum in Singapore earlier in the day. His visit to Indonesia also followed a stop in Kuala Lumpur over Thursday and Friday.

Ms Retno told reporters after the talks that Mr Joko had expressed to Mr Pompeo his hope that a US preferential tariff scheme for Indonesia, called the Generalised System of Preferences (GSP), will be retained.

The US Trade Representative's Office had said in April that it was reviewing the eligibility of Indonesia, along with India and Kazakhstan, for the GSP based on concerns over compliance with the services and investment criterion.

According to a Reuters report, Indonesia enjoys lower tariffs on about US$2 billion (S$2.7 billion ) worth of exports to the US, including some agricultural, textile and timber products.

Mr Enggartiasto said after the meeting that Mr Pompeo agreed there was a need to improve economic ties between the US and Indonesia, as the two countries look to mark 70 years of diplomatic relations next year.