Malaysia's move to introduce Arabic script in the Malay language syllabus for primary school has upset non-Malay groups and stirred fears of growing Islamisation in the racially diverse country.

Tamil and Chinese educationist groups said yesterday they would meet Deputy Education Minister Teo Nie Ching on the plan to teach Malay-Arabic calligraphy - also known as Jawi or "khat" writing - as part of the Bahasa Melayu subject. The language is taught and written using Roman script but was, in the past, commonly written in Jawi.

"We are not against multicultural elements in the country nor are we against Jawi script or the Malay language. We feel with the new syllabus, the teachers and students will carry a huge burden on their back," the groups said after meeting at the headquarters of Chinese educationist group Dong Zong.

The Education Ministry's announcement last week that it would include khat in the Year 4 syllabus for 10-year-olds next year has led to a barrage of criticism, with some lamenting that children are being overburdened and others saying it is a way of Islamising young minds.

A total of 138 officials and assemblymen from the Chinese-dominated Democratic Action Party (DAP), which is part of the ruling Pakatan Harapan coalition, have publicly opposed the plan and urged ministers from the party to do the same.

But DAP stalwart Lim Kit Siang warned Malaysians yesterday the divisive discourse was a political ploy. "We must be careful not to fall into the trap of conspirators who want to pit race against race, religion against religion, to arouse suspicion, distrust and hatred in our plural society to regain political power," he said in a statement.

Over the weekend, he defended the proposal, saying he had taught himself Jawi while detained in prison in 1969. "It did not make me any less of a Chinese and may have helped in making me more of a Malaysian," he said.

Prime Minister Mahathir Mohamad had said on Saturday that the plan would go ahead, noting that the government had never objected to other forms of writing, including in Chinese.

The move to add six pages on khat in textbooks for all schoolchildren, including those in vernacular schools, had been planned since 2014 and was meant to "inculcate the values of the legacy of the Malay language and national identity", the Education Ministry said. 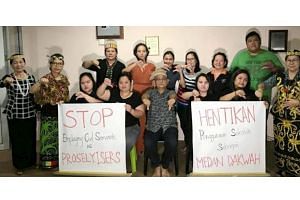 Jawi script can be seen across the country on road signs, state emblems and currency notes, and was once taught in schools. Malay pupils currently learn it as part of Islamic studies.

Ms Teo, the deputy minister, has received some 36,000 comments to her Facebook post on the issue, with many of them expressing unhappiness. One parent, upset that the DAP has not taken a stronger stance against the move, threw eggs at the party's office in Perak.

The backlash has also caused tensions to rise among the Malays.

Professor James Chin, director of the Asia Institute Tasmania, University of Tasmania, said there is already a section on Jawi, Chinese and Tamil calligraphy in Year 4 Bahasa Melayu textbooks for vernacular schools.

The uproar shows that "there is a lot of suspicion over Maszlee and the Education Ministry trying to Islamise the schoolchildren", he said, adding that the issue had become "so politicised".