Malaysian Prime Minister Mahathir Mohamad yesterday called on the Malay majority to reclaim their dignity by grasping opportunities instead of lobbying for more aid.

This exhortation came after he launched Malaysia's Shared Prosperity Vision on Saturday, an economic plan for the next decade which aims to increase Malay involvement in high-skill and technological sectors.

Tun Dr Mahathir, 94, said Malays were left behind because they failed to learn from history where foreigners were left to do "dirty, dangerous and difficult" work. "When we allow foreigners to do this work, then as time goes by, the further we fall behind," he told more than 10,000 attendees, largely Malay undergraduates, at the Malay Dignity Congress.

"Malays don't want to work because the salary is only RM1,200 (S$395) monthly. We are ashamed to accept. But to get RM500 per year, we are so proud," the PM said, in a reference to cash handouts introduced by the previous government for about half of Malaysia's population.

He added that Malays have split into different parties to try to gain positions for themselves. But this meant that despite making up 60 per cent of the population, Malays had to rely on the support of other races to form a government and became indebted to them.

"Nobody did this to us. We ourselves caused this split," he said.

Top Malay leaders across the political divide attended the event, including PAS chief Abdul Hadi Awang, Umno secretary-general Annuar Musa and several current and former ministers. The congress was co-organised by four public universities where Malaysia has long implemented Malay quotas, or the outright exclusion of other races.

Head of the secretariat of the congress Zainal Kling opened proceedings by insisting Malaysia belongs to Malays and that the "social contract" under which migrant communities were given citizenship could be suspended if special Malay rights were challenged.

THE BIG STORY: Division ahead for Malaysia’s ruling coalition? | The Straits Times 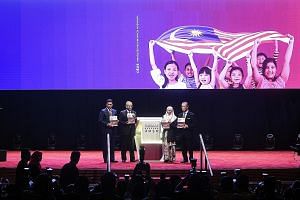 The social contract is a term used to describe how migrants who had already settled in Malaysia when it gained independence in 1957 were granted citizenship in exchange for certain constitutional guarantees for Malay and indigenous rights.

The crowd, which overflowed at the Melawati Indoor Stadium, loudly supported this statement, as well as several pro-Malay-Muslim resolutions that were presented.

These included excluding other races from scholarships by government agencies, such as national oil firm Petronas, and from top government positions, such as finance minister, attorney-general and state-level chief minister, which are currently held by non-Malays in the PH government.

Dr Mahathir received these resolutions prior to his address and said "this reflects the feelings of the Malays".

"It is a demand, but it doesn't tie the government down. We have to look into what we can do," he said.

He also insisted that the gathering was not racist in nature as "we are not condemning Chinese or Indians. In fact we are condemning Malays".

A version of this article appeared in the print edition of The Straits Times on October 07, 2019, with the headline 'Up to Malays to reclaim dignity by grasping opportunities: Mahathir'. Subscribe
Topics:
More
Whatsapp Linkedin FB Messenger Telegram Reddit WeChat Pinterest Print Purchase Article Copy permalink