The country's Securities and Exchange Commission revoked Rappler's licence on Jan 11 for ownership violations. Maria Ressa, chief of Rappler, met state investigators on Monday (Jan 22) to answer what she called a suspicious complaint about a 2012 story.

"We are gravely concerned that the government is moving to revoke Rappler's licence," three UN human rights experts said in a joint statement on Thursday (Jan 25). "We are especially concerned that this move against Rappler comes at a time of rising rhetoric against independent voices in the country."

The Philippines authorities deny Rappler is being punished, but say it broke the law in 2015 by granting American investor Omidyar Network the means to exercise control over the news site, or veto powers on company decisions.

Rappler, which continues to operate normally pending an appeal, denies it broke the law.

"Rappler's work rests on its own freedom to impart information, and more importantly its vast readership to have access to its public interest reporting," the UN experts said.

There was no basis under international human rights law to block Rappler from operating, they said. "Rappler and other independent outlets need particular protection because of the essential role they play in ensuring robust public debate," the experts said in the statement. 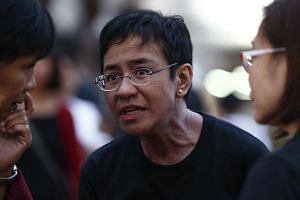 Responding to the UN experts, Philippine presidential spokesman Harry Roque said Rappler was a business operating in breach of the constitution and its journalists had been neither blocked nor censored.

"(The) allegation that it's about press freedom is fake news," Mr Roque said in a text message.

"It's about avarice for money that violates the (constitution) and the laws of the land. Let me know if any of the journalist of Rappler's have been prevented from reporting, or if they've been censored."