"I'm serious," he was quoted as saying by Malaysiakini on Thursday (Sept 13).

Datuk Seri Nazri said he wanted to campaign for Mr Anwar, as he believed that it is what's best for Umno to pave its return to the government.

"I don't foresee Umno being in government in the near future but there is some common thinking among Umno MPs that we should come back into government as early as possible.

"The only way to do that is to work with PKR... so we should show some goodwill... If we want to form the government, let Anwar win," he said.

On Umno deputy president Mohamad Hasan saying that the party would give Mr Anwar a fight in Port Dickson, Mr Nazri said he was of the view that this was not an Umno decision.

The former tourism and culture minister was also quoted as saying that Datuk Seri Mohamad, the former Negri Sembilan Menteri Besar, was "not an MP and does not know what we MPs are planning". 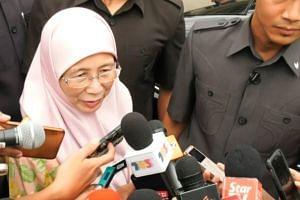 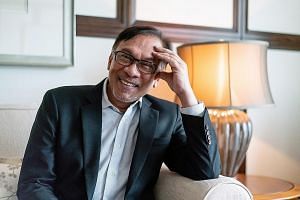 Mr Nazri, who is currently said to be holidaying in Paris, also said that Umno could not win the seat and should let PKR carry on with replacing the seat's MP.

Mr Nazri would still campaign for Mr Anwar even if Umno contested the seat, as he said he wanted to do what was "best for Umno, not for individual interests".

"I will still campaign for Anwar, but this is still speculative (that Umno will contest)," he said, adding that he was prepared to face disciplinary action for his stand.

PKR was the party that the people had chosen, as shown by the past three by-elections, said Mr Nazri.

"There have been three by-elections. MCA (Malaysian Chinese Association), PAS (Parti Islam Se-Malaysia) and Umno lost badly, the people did not budge and still rejected those who fought against PKR (and Pakatan Harapan).

"So you have to be close to the people and they want to give PKR a chance," he said.

"Greetings from DS Nazri Aziz, Padang Rengas MP who is now in Paris on a vacation, who fully supports the much-anticipated news that DS Anwar Ibrahim will contest in Port Dickson.

"God willing, I will return to Malaysia to support and campaign for DS Anwar Ibrahim to ensure his victory.

"Not all Umno members support the statement made by MD Hasan (Mohamad)," Haflin wrote.