Still reeling from a shock election defeat five months ago and the consequent departure of party allies and several MPs, Malaysia's former ruling party Umno has been struck another blow - criminal charges against its new president, Ahmad Zahid Hamidi.

Party members bussed into Kuala Lumpur in the wee hours of Friday morning congregated by 6am outside the courthouse, waiting to show support for Zahid, Umno's first sitting president to be charged.

Umno has been struggling to find its footing as an opposition party, analysts say, and the charges against Zahid and former premier Najib Razak have shaken party members alien to an environment of powerlessness.

"With or without the court proceedings, the party needs a strong leadership and a clear direction," said Mr Adib Zalkapli, a consultant at Vriens and Partners.

Umno leaders appear at odds over which of three paths to take - going it on its own, formally forming an allegiance with fellow opposition Parti Islam SeMalaysia (PAS) or finding a way to partner parties from the present government.

Umno's general assembly last month indicated that delegates would like the party to proceed on its own, but plans for achieving this objective seem lacking.

"Power and resources are concentrated in Umno division chiefs... They are able to filter out ideas and initiatives that they do not like," said Mr Francis Hutchinson, senior fellow at ISEAS - Yusof Ishak Institute.

"Even though there are new ideas and proposals being floated at the branch level, they do not get surfaced at the central level. This inherently conservative structure makes change difficult," he added.

Zahid, 65, a former deputy prime minister, was charged last Friday with money-laundering, abuse of power and criminal breach of trust involving more than RM114 million (S$38 million). Some of the charges are linked to his welfare foundation, which builds religious schools, mosques and orphanages.

"I take it as a test from God since all the charities were deemed as violation of law by certain quarters," he said.

But most of the 45 charges levelled against him were tied to corruption during his tenure as home minister. Die-hard followers have decried the case as a political witch-hunt, holding placards outside court that said: "Stop political persecutions" and "This isn't rule of law".

Malaysians have become accustomed to such scenes of detention, protests and court appearances over the last two decades since the sacking of former deputy prime minister Anwar Ibrahim in 1998. But the tables have turned since Pakatan Harapan ended Umno's six-decade grip on power in the historic May 9 polls, and it is now Umno leaders standing in the dock.

Hundreds of people showed up last Friday to support the Umno president but the uncertainty surrounding the once-mighty party with a purported three-million membership has been unnerving.

"Many Umno members do not know how to function as opposition activists," said Mr Adib. "With its leadership facing prosecution, those who wish to leave now have another reason to do so."

For a party that is trying to distance itself from claims of endemic corruption, a sitting president facing graft charges does not bode well. Whether this will spur the party faithful to fall in line behind their embattled leader or jostle for power in his absence remains to be seen.

Umno deputy president Mohamad Hasan told reporters that Zahid may have to go on leave while on trial, as per the party's internal procedure. Umno's top leadership will have to decide on this. 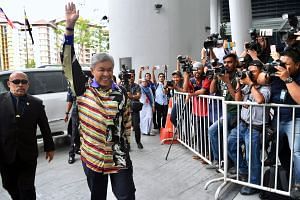 Umno veteran Tengku Razaleigh Hamzah said yesterday that in the past, party leaders implicated in legal wrangles gave up their position or took leave. "The party can go on. Just because a person is not there, the party won't die," he said, as reported by The Star.

Despite Umno's woes, it is still too soon to declare that the party is on its deathbed, given that Malaysia's political scene has few Malay-centric parties. After all, the Malay-majority voters did hand victory to 54 Umno MPs, the biggest number from any single party, in the May elections. Subsequent resignations have now left Umno with 48 out of 222 lawmakers in Parliament.

"It is too early to declare Umno's demise. I think there is still a market for a Malay-only opposition party," said Mr Adib. "The opposition bench in Parliament is Malay-dominated, the majority of them from Umno, so the party has a powerful platform to stage a comeback."

Realistically, Umno has a shot at wresting power again, but much depends on its leaders.

"It is theoretically possible for the party to survive but it needs to decide what direction to follow, how to transform into a credible opposition party and also how to raise funds from members. This last issue will be particularly difficult for them," said Mr Hutchinson.

Former Umno youth leader Khairy Jamaluddin said last Friday: "Nobody can tear down the struggle for religion, race and country… We will rise to prove Umno is still relevant and the people's choice".

How and when, those are the questions Umno leaders have no answers to yet.