Daim and Rafidah hit back, calling Umno an illegal party; a third ex-minister under probe

Malaysia's ruling party Umno yesterday said it has sacked two former prominent members, former ministers Daim Zainuddin and Rafidah Aziz, for working with the opposition, and has placed a third one under investigation.

"According to the party's Constitution, they as Umno veterans should know their actions were wrong when they give ceramah (speeches) on the opposition's stage," Umno's secretary-general Tengku Adnan Tengku Mansor told reporters.

Tun Daim and Tan Sri Rafidah were on stage with opposition chief Mahathir Mohamad at an opposition rally in Melaka on Friday evening.

Datuk Seri Tengku Adnan also said former minister Rais Yatim, 76, is being probed over whether he colluded with the opposition.

The trio shot back, with former finance minister Tun Daim, 80, describing Umno, which leads the Barisan Nasional (BN) coalition, as "an illegal party".

"Tengku Adnan has no power to sack anyone. Umno is an illegal society," Mr Daim told The Sunday Times, adding that Mr Tengku Adnan is "responsible for the mess that Umno is in today".

Former trade minister Ms Rafidah, 74, said she is not a member of an organisation that supports "kleptocracy".

"Umno does not even abide by its own Constitution and is existing without legal foundation and standing," she told Malaysiakini news site, referring to the party postponing its internal election for nearly three years. "Do I still want to be a member of such an organisation, which also seems to condone kleptocracy? No way."

Former culture and information minister Mr Rais, 76, said he plans to campaign for the Pakatan Harapan (PH) pact led by Tun Dr Mahathir. In recent weeks, Mr Rais has tweeted calls for change, implying that he backs the opposition. 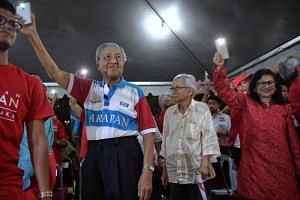 Umno was to hold its polls - which usually take place every three years - in October 2016, but obtained an 18-month extension until last month from the Registrar of Societies (ROS). In March, it obtained another extension to postpone its polls to April next year, raising legal questions on whether this is permitted in the party's Constitution. A court last week threw out a legal challenge to the ROS decision by former Umno members.

Meanwhile, Mr Daim has appeared at several opposition events since Monday. He has gone to parliamentary wards which saw marginal wins by BN in the 2013 polls, as well as highly redelineated seats.

The visits are no mere coincidence as these are wards where PH has a chance of winning but would very much have to rely on the Malay vote to bring about a shift in power.

While 41 per cent of Malaysia's 14.9 million voters are below the age of 40, and widely seen to be supportive of the opposition, members of the elder generation have largely been staunch BN supporters. Voters above age 50 make up 44 per cent of the electorate.

PH candidates such as academician Wan Saiful Wan Jan, who is running in Kedah, said the Daim effect is rubbing off on his campaign.

"People who don't know me before today asked, 'Are you the one endorsed by Daim?'" he told The Sunday Times.

Elderly Malays who went to Friday's rally in Melaka said they wanted to see the country's famous veteran politicians in person. Some of them said they decided to support the opposition only this year.

Ms Nurazura Abu Bakar, 43, said her family, including elderly members, all decided to switch camps to the opposition in January. She added: "It appears that the government no longer knows how to manage the country."

The political veterans believe the increased attention given by Umno may draw even more public support for the opposition.

"They have made us important," Mr Daim said. "If not, nobody will be interested in us."