Kuala Lumpur - Umno president Ahmad Zahid Hamidi lashed out at internal critics on Sunday (Sept 30), as he sought to quell dissent and unite ranks amid complaints that Malaysia's former ruling party remains directionless after suffering defeat in the May general election.

"Those given the mandate to lead should be fully trusted to implement (party) reform," Datuk Seri Zahid told over 5,000 delegates in his closing speech at the Umno general assembly in Kuala Lumpur on Sunday.

He said that decisions of the party's Supreme Council should be respected despite differing opinions, signalling that the country's largest party by membership is still divided on the way forward now that it is in the opposition.

"I am open (to a difference of opinion) but when I'm pushed to the wall, my openness has its limits. This is Zahid Hamidi," he warned.

Nevertheless the former deputy prime minister conceded that the party, which still has 49 of 222 lawmakers in Parliament, was not pursuing his idea for a "unity government" to be formed with parties within the ruling Pakatan Harapan pact.

Since its loss at the polls, Umno has tacked closer to fellow opposition member Parti Islam SeMalaysia (PAS), which has 18 parliamentary seats. PAS deputy president Tuan Ibrahim Tuan Man has said the party is open to a unity government with Umno. To secure government, a simple majority of 112 seats is needed. PH component Parti Keadilan Rakyat (PKR) has 49 wards, and had been touted as the most likely party that Umno could team up with.

"Unity government issue is closed," Mr Zahid told a press conference at the end of the three-day assembly. 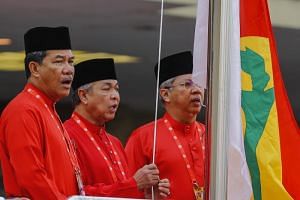 His proposal had received short shrift from his Umno colleagues.

Former minister Khairy Jamaluddin, who contested against Mr Zahid for the president's post in this year's party polls, has become the party's biggest internal critic, pointing out that Mr Zahid hasn't been clear with the party's direction.

"You said previously that we should fight the cruel Harapan government. Then you came out with a statement saying we were exploring opportunities via a JV (joint venture)," said Mr Khairy.

Umno Youth chief Asyraf Wajdi Dusuki said any political cooperation shouldn't be at the expense of selling the party's dignity, with power gained via the backdoor.

Mr Zahid's deputy Mohamad Hasan was also quick to reject the idea on Sunday, saying Umno must strive to regain Putrajaya on its own, and not dream of being invited to form the government.

"We shouldn't play second fiddle. Why should we? We were in power and the government," he added, referring to the six decades of Barisan Nasional administration, led by Umno.

While the assembly delegates were urged over the weekend to come together in an effort to renew and reform the party, the combative tone of Mr Zahid's winding-up speech showed there are still unresolved issues in the ranks.

"It's not a difference of opinion but betrayal of the party if ... (the opinion) is (given) not to plug holes, but to poke holes in the ship," Mr Zahid said.

At the assembly, Mr Zahid had outlined a seven-policy, 21-step strategy for Umno to revive itself. However, weak applause greeted his announcement that he would personally helm the secretariat tasked with implementing the strategy.