He was arrested on Thursday after arriving at the headquarters of the Malaysian Anti-Corruption Commission (MACC) for another round of questioning, in a major blow to the once-mighty Malaysian political party that ruled the country for 61 years.

Datuk Seri Zahid, 65, was also the home minister who controlled the MACC until the May general election, when the Umno-led Barisan Nasional (BN) coalition was toppled from power.

The MACC said Mr Zahid will face several charges under the MACC Act 2009 and the Anti-Money Laundering, Anti-Terrorism Financing and Proceeds of Unlawful Activities Act 2001.

A source told The Straits Times that Mr Zahid may also be charged under the Penal Code – possibly under Section 409 – which carries a maximum jail term of 20 years, caning and a fine.

Some of the charges are related to his family-run welfare foundation.

One of them is believed to be related to claims that RM800,000 of funds from his charity, Yayasan Akalbudi, had been used to pay for Mr Zahid’s and his wife’s credit card bills between 2014 and 2015. Mr Zahid has said the payments were due to an error by an aide, and he has since settled the bills himself.

“Zahid’s image as Umno’s president and chairman of BN has been tarnished, this will cause people’s confidence towards Umno to decline,” said analyst Awang Azman Awang Pawi of the University of Malaya.

Charging Mr Zahid would also raise fears among other party leaders that they could be next, he said.

Mr Zahid took over from Najib soon after the election defeat, promising to lead Umno’s rebound. But both he and the Malay nationalist party are struggling to adjust to their roles in the opposition, analysts say.

Umno, which claims to have more than three million members, called on them to gather at the MACC headquarters in Putrajaya on Thursday evening to show solidarity with its president. At 10.30pm, around 200 people had gathered, some wearing orange T-shirts resembling those issued for MACC prisoners. 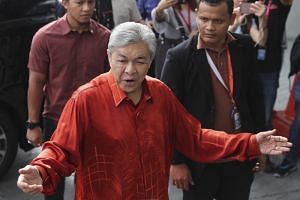 Many Umno bank accounts are still frozen by investigators probing whether the party received cash from 1Malaysia Development Berhad, the troubled state fund that was headed by Najib. Umno won 54 parliamentary seats in the May polls, but six MPs have defected, with speculation that more are planning to jump ship.

Umno leaders held a meeting on Wednesday evening after hearing that Mr Zahid would be arrested, and agreed to continue backing his leadership. “We have decided not to take any action, and instead will staunchly support him,” The Star newspaper quoted Umno Supreme Council member Ahmad Maslan as saying.