In a two-hour-long speech, he said Malaysia's biggest party - with more than three million members - will not open up to other races, and launched attacks on the Pakatan Harapan (PH) government and those who left Umno after the shocking electoral defeat in May.

He twice praised his predecessor Najib Razak, who was given a standing ovation from the 5,700 party delegates when his name was first announced in the cavernous hall at the Umno headquarters. Najib, who was Malaysia's prime minister, attended as an ordinary party member.

Datuk Seri Zahid, 65, said he supported the notion by enemy-turned-ally Parti Islam SeMalaysia that "Islam should lead" the country.

In short, while outsiders are keen to see whether Umno will move in a major new direction to regain the trust of voters, Mr Zahid and his party leaders seem unlikely to shift away from the race and religion card.

"Umno is not a racist party, or prejudiced, or a threat to other races. Malays have never sidelined any other races," he told the delegates.

"The fact is that today it is the Malays who are most vulnerable to the bias and prejudice by other races towards them. Malays are accused of being stupid and said to be lazy, too dependent on subsidies and government aid," he said.

"When we are challenged with Malaysian Malaysia, we will rise to defend our rights as stated in the Constitution," he said, referring to a slogan often linked to the Chinese-led Democratic Action Party. 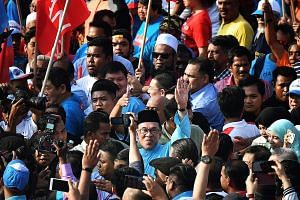 Mr Zahid also spent a significant portion of his speech attacking five MPs and several state lawmakers who had left the party to become independents or switched to PH parties. "They no longer have the moral basis to remain as elected representatives. The seats belong to Umno. The seats belong to Barisan Nasional (BN) supporters," he said, to loud cheers from the crowd.

Mr Zahid said the party had served writs of summons to these lawmakers.

"We demand them to return the money involving costs and they should also vacate the seats that they won under the Umno and BN ticket," he said.

Under Malaysian electoral laws, lawmakers are allowed to become independents or join other parties. Umno-led BN caused the Perak state government under the then Pakatan Rakyat alliance to collapse in 2009 by luring away three lawmakers.

Mr Zahid, in his speech, did make a small move forward, by proposing a limit of two terms for Umno presidents. He wants members to deliberate on this.

And he wants a "rebranded" BN, consisting of five core parties, by allowing direct membership into the coalition.

"The main core parties will consist of Umno, MCA, MIC, MyPPP and Parti Bersatu Rakyat Sabah (PBRS), followed by the parties of other coalitions that understand the aspirations and ideals of struggling together," he said.

BN shrunk to just Umno, the Malaysian Chinese Association (MCA) and the Malaysian Indian Congress (MIC) after the May polls defeat. Mr Zahid's speech indicated that MyPPP (formerly the People's Progressive Party), which has no seats in Parliament, and PBRS, which has one MP, have rejoined BN.

A version of this article appeared in the print edition of The Sunday Times on September 30, 2018, with the headline 'Umno pledges to fight on for Malays and Islam'. Subscribe
Topics:
More
Whatsapp Linkedin FB Messenger Telegram Reddit WeChat Pinterest Print Purchase Article Copy permalink