Former Malaysian ruling party Umno yesterday kicked off its first annual assembly as an opposition party, with its leaders still searching for solutions to move the party forward following the shock electoral loss in May.

"Losing power has led to Umno losing its direction... We must redeem our guilt for losing the election by being responsible and bring back the Umno we know," said deputy president Mohamad Hasan.

Speaking at the joint opening of the party's three wings - Youth, Women and Puteri (Young Women) - Datuk Seri Mohamad also self-criticised the party, saying it needs to learn from the mistakes that caused the Barisan Nasional (BN) coalition's first defeat in 61 years.

"We had failed to grasp that Malaysia has changed. It is now modern, global and developed," he told the wing delegates gathered at party headquarters. "The new generation does not just say 'Yes'. The new Malays are not sentimental towards Umno."

He also criticised its past culture where "everything was about money". "Some fought for certain leaders who could give them rewards" in the form of cash or contracts, he said.

Reflecting its fallen status, the annual meeting that will end tomorrow is a three-day event, compared to the usual five-day meeting that had the atmosphere of a carnival when it was in power.

Mr Mohamad called for the delegates to revive Umno by bringing in "fresh and great ideas" to rejuvenate the party, and not just by following orders from the top like in the past.

We had failed to grasp that Malaysia has changed... The new generation does not just say 'Yes'. The new Malays are not sentimental towards Umno.

Reiterating Umno's decades-long stance that it is the only political party fighting for Malays, Malaysia's majority ethnic group, he said: "Umno must be the safety net for Malays. Who else will represent the strategic interests of Malays?"

Umno currently has 49 MPs, tying it as the biggest party in the federal Parliament with ruling Parti Keadilan Rakyat (PKR) led by Datuk Seri Anwar Ibrahim. PKR will have 50 MPs should Mr Anwar win the Port Dickson by-election on Oct 13.

Trying to perk up spirits, Mr Mohamad noted that Umno had won in the first 13 general elections, but only lost one. Victory, he said, is possible in the future. "To rebuild Umno post-election is difficult. But we must choose... To continue in Umno or to let it expire from Malaysian politics."

BN was once a mighty force that had continuously ruled Malaysia - it was one of the world's longest ruling parties still in power - until it lost after six decades. 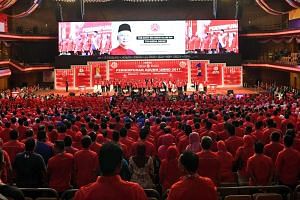 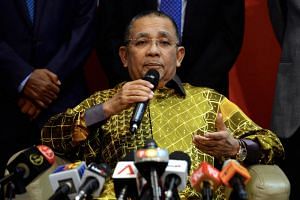 Today, the BN coalition that once had 13 parties under its umbrella has just three members.

Though Umno won 54 Parliament seats in the May polls, five lawmakers have since left the party.

Its effort to grow again has seen it forming a working relationship with once bitter Malay Muslim rival Parti Islam SeMalaysia.

And Umno's new president Ahmad Zahid Hamidi has raised eyebrows recently by saying it was seeking a "unity government" with one of the Malay parties in the ruling Pakatan Harapan (PH) alliance. Datuk Seri Zahid said he was pursuing the option because "many want Umno to be a part of government".

"This means they hope we'll be the 'government-in-waiting'," said Datuk Seri Zahid, in an interview with New Straits Times this week.

Leaders from PH have rubbished the notion of joining hands with Umno, with Prime Minister Mahathir Mohamad saying instead that Umno would collapse.

Mr Zahid will open the main annual assembly today, with the 5,739 party delegates keen to know whether he has other big ideas for the party.