KUALA LUMPUR (THE STAR/ASIA NEWS NETWORK) - Umno's 191 divisions from across the country began their meeting on Saturday (June 30) to choose a new president and other top-office bearers for the next three-year term.

Party members were seen at the Putra World Trade Centre (PWTC) as early as 8am to register to vote in the party polls.

Another two relative unknowns - the division committee member for Bandar Tun Razak in Kuala Lumpur Mohamed Iqbal Maricair and Mohd Yusof Musa of the Iskandar Puteri division in Johor are also vying for the top post.

The outcome of the contest will be closely-watched, with the winner tasked with turning the long-ruling party into a credible opposition outfit following its shock electoral loss last month. The defeat to the Pakatan Harapan alliance had ended the party's six-decade grip on power.

The three main presidential hopefuls on Friday (June 29) took part in an unprecedented debate that was televised live, with all three pledging to reform the party even as they each disagreed on the approach they would take to deliver it.

Datuk Seri Zahid, who took over the presidency following the resignation of former Prime Minister Najib Razak last month, pledged to lead an overhaul of the party structure to shed its elitist image and make it more accountable to its over three million members. 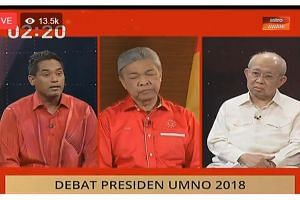 Umno's presidential candidates, in first major political debate on TV, say change is a must

Tengku Razaleigh, better known as Ku Li, said in order for Umno to remain relevant and to rejuvenate, money politics must be completely eradicated from the party.

Khairy, the party's former Youth chief, has pointed to the 1Malaysia Development Berhad (1MDB) saga to urge the party to seek fresh leadership.

He has said that his "biggest regret" was that he did not press on with his questions about the 1MDB scandal and that the party must get rid of the politics of patronage and show that it is not only inclusive to the Malays but also accepting of other races.

Aside from the party president's post, the deputy and three vice-presidencies and 25 supreme council member posts will also be up for grabs.

The party last held its party election in 2013, four years after adopting an electoral college system to widen its voters base.

Under the new system first used in 2013, voters will be casting their ballots at their respective divisions.

The Subang, Kepong and Bukit Bintang Putrajaya divisions are holding their meeting at the PWTC.

The results are only expected to be made known late at night or even possibly even tomorrow, depending on the counting process and the possibility of recounts due to disputes.