KUALA LUMPUR (THE STAR/ASIA NEWS NETWORK, BERNAMA) - More than 150,000 delegates of Malaysia's largest political party Umno will on Saturday (June 23) vote for the chiefs of its three wings as the party tries to rebound from its shock defeat in the May 9 general election.

Delegates from over 20,000 party branches would be casting their votes to decide who will lead the Malay nationalist party's Youth, Wanita (women) and Puteri (young women) wings at their respective division meetings.

Leaders at both divisional and national levels will also be chosen.

Vote counting would be done at the meeting venues, with the results expected to be announced in the evening.

The post of Puteri chief is a contest between vice-chief Zahida Zarik Khan and exco member Nor Hazreena Mohamad Hashim. 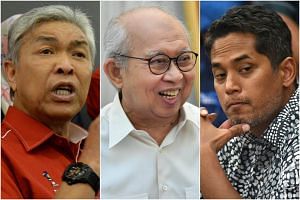 Elections to the senior party's Supreme Council, including the president and deputy president, will be held on June 30.

Four people have entered the race against acting president Ahmad Zahid Hamidi, 65, who is also assuming the duties of Barisan Nasional chief, following the resignation of former Prime Minister Najib Razak in the wake of the party's defeat.

They include the 81-year-old veteran leader Tengku Razaleigh, popularly known as Ku Li, who was finance minister from 1976 to 1984 and the 42-year-old outgoing Youth Chief Khairy,a surprise candidate to the contest.

In an interview with Astro Awani on Friday (June 22), Datuk Seri Zahid said the party had to face the reality of its defeat at the May election.

Zahid said Umno has to eradicate the culture of warlords and money politics to return the people's trust and that of its own members to the party.

Zahid, who is also assuming the duties of Umno and Barisan Nasional chief, added that Umno still commanded significant Malay support. "At the same time, the reality is we have 54 seats in Parliament and our popular vote is around 46 per cent. This shows an increase from the 13th General Election, meaning that the Malays in general still prefer Umno and Barisan Nasional," he said. "But maybe the non-conventional approach taken by our political rivals have given them the edge, such as their decision to use a common logo," he said.

He also said Umno has to change its DNA from being the government to the opposition, in terms of its spirit, approach and activities. "Maybe we have always been in the comfort zone. Although we still have Pahang and Perlis, the fact is we are now left with only two states and the 'opposition DNA' has to be implanted now," he said.

He said Umno also had to acknowledge the present Pakatan Harapan (PH) government and give it a chance to prove itself in the first 100 days to roll out the promises in the PH manifesto.

Meanwhile, Bernama quoted Tengku Razaleigh as saying that the party had to undergo a clean-up and renewal to redeem itself.

The former finance minister better known as Ku Li said the party must give priority to changing its leadership style as Umno leaders had been labelled by the people as "arrogant, too elitist and difficult to make appointments with".

Saying that he would highlight these should he be elected as party president, Tengku Razaleigh, 81, said such an approach could be the "cure" to the people's perception of the party.

"We want to ensure that the party's policies can cure Umno, particularly in the aspect of integrity which was previously viewed less favourably by society," he said.

"(Umno leaders and members must) try to behave, not engage in things disliked by the people, such as corruption and so on," he told reporters on Thursday night.

Asked whether the "clean-up" in Umno should also involve a change of positions, Tengku Razaleigh said it was up to the division and branch delegates as he was now convinced that the grassroots were well aware of the rabble-rousers in the party.